Uganda’s Permanent Representative to the United Nations (UN) Amb. Adonia Ayebare has been appointed by the President of the UN General Assembly, H.E. Tijjani  Muhammad Bande, as the External Adviser on G77 matters.

This is contained in a statement issued Tuesday by the Department of Public Diplomacy of Uganda’s Ministry of Foreign Affairs.

In execution of one of the key roles as External Adviser, Amb. Ayebare  is expected to galvanise efforts to address the common challenges faced by the countries of Global South as well as provide a platform for constructive engagement.

The Group of 77 (G77) at the United Nations is a coalition of 134 developing nations, designed to promote its members’ collective economic interests and create an enhanced joint negotiating capacity in the United Nations.

Since China participates in the G77 but does not consider itself to be a member, all official statements are issued in the name of The Group of 77 and China.

The group was founded on 15 June 1964, by the “Joint Declaration of the Seventy-Seven Countries” issued at the United Nations Conference on Trade and Development (UNCTAD).

The first major meeting was in Algiers in 1967, where the Charter of Algiers was adopted and the basis for permanent institutional structures was begun under the leadership of Raul Prebisch who had previously worked at ECLA.

There are Chapters of the Group of 77 in Geneva (UN), Rome (FAO), Vienna (UNIDO), Paris (UNESCO), Nairobi (UNEP) and the Group of 24 in Washington, D.C. (International Monetary Fund and World Bank).

In September this year, Ambassador Adonia Ayebare was elected Chair of the esteemed Africa Group of Permanent Representatives to the United Nations, for the month of September.

The election came as Africa took over the Presidency of the UN General Assembly, with Prof. Tijjani Muhammed Bande Permanent Representative of the Federal Republic of Nigeria as President of General Assembly.

His diplomatic career began in 2001 when he was appointed as Uganda’s Principal Adviser and Special Envoy to the Burundi peace process, serving in that capacity until 2008.

Between 2002 and 2005, he served as Uganda’s Ambassador and Head of Mission to Rwanda and Burundi.

In 2005, he was transferred to Uganda’s mission at the United Nations, based in New York, serving as Deputy Permanent Representative and Chargé d’affaires until 2008. 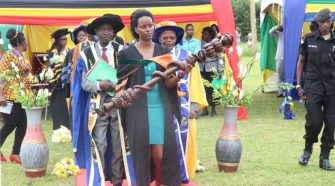 1,032 Graduate at MUST, Minister Urges Universities on Quality Assurance