The leadership of the Association that brings together Ugandans living in North America has halted the appointment of the new Board of Trustees pending the resolving of the existing conflict with a parallel President.

Dr Busuulwa Daniel Kawuma, the President of the Uganda North America Association (UNAA) has called off the due process of choosing new members to constitute the Board and instead proposed the extension of tenure of the current six person Board of Trustees which has served for the last three years.

“I propose pending approval and confirmation by the UNAA Council that the term of the current board members is extended through the Annual General Meeting,” Dr Kawuma said in a statement dated April 4.

The President lauded the Board for its hard work and said he is confident that “they can play a crucial role in offering continuity and insight in resolving the outstanding issues that need to be addressed to move UNAA”.

Having been appointed on April 15, 2015, the serving Board’s tenure will expire in the next ten days and as required by Article 5.1 of the UNAA constitution, nominees for the new Board should be presented to the UNAA Council by the Executive Committee for confirmation.

However, the existing disagreements between the two Presidents which also culminated into a law suit before the Superior Court of Massachusetts do not allow both bodies to choose a new Board.

Kawuma says these events including a failed arbitration with parallel President, Monday Atigo who heads the rival faction place UNAA under “unprecedented circumstances” with uncertainty over the Executive leadership.

“As a result of this active legal measure, any attempt by either Kawuma or Atigo to nominate a new Board of Trustees is ill advised and could face a legal challenge,” he adds in the statement.

“Though I already have a list of seven qualified UNAA BoT nominees to present to the UNAA Council for confirmation, for the good of the organization I am opting to postpone that process until further notice,” the UNAA President says.

This decision, he says, will prevent worsening an already volatile situation.

Accordingly, he submitted a proposal to the Speaker of the UNAA Council to consider letting legal proceedings play out and or wait for a resolution by members at the AGM in Seattle prior to confirming a new board.

UNAA is the largest association of Ugandans in the Diaspora started 29 years ago to unite the now estimated 150,000 Ugandans in both Canada and the US, who, it is estimated, contribute about half of the $1b (sh3.65 trillion) remitted to Uganda by Ugandans living in the diaspora annually.

UNAA’s woes erupted in November last year when the two (Atigo and Kawuma) disputed the outcomes of an election in which Atigo was elected President, leading Kawuma with 23 votes.

Kawuma filed a petition challenging the elections and a special election was sanctioned and endorsed by the UNAA Board of Trustees (UNAABOT) on November 12, 2017.

The UNAA electoral commission after fresh elections (conducted online) earlier this year declared Kawuma the ‘rightful’ President. But Atigo, his camp and part of the Electoral Commission would boycott the election and refer to Kawuma as illegally elected. 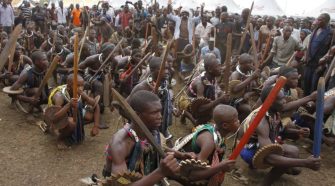