Uganda National Bureau of Standards (UNBS) has come out to clarify on the recent media reports regarding the alleged fake eggs on the Ugandan market.

UNBS said that the story carried in the New Vision was a misrepresentation.

“Our attention is drawn to the story that appeared on the front page of Sunday Vision of 28th October 2018 under the headline: “Fake eggs hit Kampala Market”. The story contains inaccuracies and misrepresentation of facts particularly on comments attributed to our market surveillance officer,” UNBS said in a statement on Tuesday.

The standards body stated that the New Vision in reporting the story misunderstood the findings by the survey carried out by UNBS surveillance teams.

“The products referred to in the article by our market surveillance team were actually sweets in packages that looked like egg shells but clearly labelled as Funny Toys,” the statement by UNBS read in part.

They clarified that apart from the appearance of the package, the products (sweets) did not contain any features meant to mislead the public into believing that they are actual eggs.

“Our intervention as UNBS was due to suspected tampering with expiry dates and labels in Chinese language in violation of the standard for labelling pre-packaged foods (US EAS 38: 2014)”.

UNBS says it has not received complaints or come across cases of fake eggs on the market.

Nonetheless, the entity has appealed to the public to volunteer information that can help in investigations to report such cases. (Toll free line: 0800133133).

In addition, the public has also been asked to always look out for UNBS Distinctive Mark as a quality assurance that a locally manufactured product meets the required standards and to report any cases of substandard products on the market. 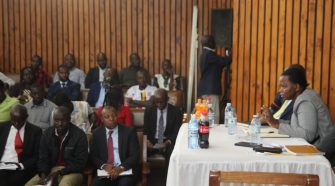