The United Nations Capital Development Fund (UNCDF) has in partnership with the Swedish government launched a program that seeks to ensure inclusion in access to digital services among the vulnerable and marginalized communities in Uganda.

Dubbed ‘Leaving No One Behind in the Digital Era’, the five-year programme is aimed towards system change.

The goal of the new strategy is to empower millions of people in least developed countries to use digital services on a daily basis that leverage innovation and technology.

The official signing of a partnership agreement was done at Protea Hotel Kampala on Monday, between UNCDF’s Executive Secretary, Judith Karl and the Ambassador of Sweden in Uganda, Per Lindgärde.

In her remarks, Judith Karl said the program is going to enable UNCDF to continue its contribution to the building of an inclusive digital economy in Uganda and beyond.

“Today’s signing is a powerful reflection of the work that UNCDF has done with its essential in-country partners to make the finance for development architecture work for Ugandans,” the UNCDF Executive Secretary said.

She also highlighted the positive impact that has resulted from the previous partnership between the Fund and the Swedish government.

She however mentioned that there is still a financing gap to be bridged, especially in the least developed countries.

To meet the SDGs by the 2030 deadline, Karl said, “we need more capital and more champions to pave the way for others to follow”.

“With today’s signing, we are deepening UNCDF’s partnership with both Sweden and Uganda, because today’s agreement means that UNCDF will help advance Sweden’s 2018-2023 development cooperation strategy with Uganda”.

On his part, Ambassador Lindgärde said technology development is moving at an unprecedented pace and as a result creating new opportunities and generating new services.

“A strong international effort is needed to ensure nobody is left behind in the transition to the digital economy,” he said.

The Swedish Ambassador however noted that the benefits of digital transformation have not been evenly spread among societal groups, genders or even sectors.

He said: “More than half of the world’s population cannot access affordable internet or is using only a fraction of is potential despite being connected. And in Uganda, it is not different”.

The program will focus on three specific sectors – agriculture, health and education which are particularly important for Uganda’s future economic and human capital development.

From 2014 to 2018, UNCDF support assisted in growing the proportion of the Ugandan adult population actively using a digital finance account from 26 percent to 44 percent. This comprises a market increase of 5 million users. 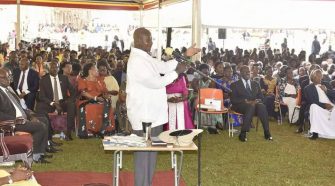