The Minister of State for Primary Education, Rosemary Seninde has Thursday presided over the release of the Uganda National Examinations Board (UNEB) official timetable for the 2019 examinations which will start in October to early December, 2019.

During the release, the UNEB Executive Secretary, Dan N. Odongo told the press at the Uganda Media Centre that the final information such as names of candidates, their index numbers and subjects for which they have registered has been sent to examination centres countrywide for final confirmation and verification by the candidates.

Odongo said the registration status of candidates can be established from schools/ centres, or by using a link or via SMS by typing the full index number and sending to 6600.

For centres that have not paid in full examination fees or for any student not registered, the status will reflect ‘not registered’.

“To any candidates that find out that they were not registered, all hope is not lost at the moment, they can approach UNEB and be taken through late registration though at a double cost,” Odongo said.

“I urge the parents and interested members of the public to check the registration status of their children when there is still time for UNEB to take remedial measures,” Odongo added.

Odongo warned the public especially schools and candidates to desist form examination malpractice and leaking of fake examination papers before and during examinations period.

“I wish to assure the nation further that the procedures and operations involved in producing examination papers from the UNEB printing press are not as casual as portrayed in the media. They are carried out under very high levels of security approved by the nation’s security agencies which are working with UNEB,” Odongo said.

The UNEB boss noted that the measures are more than adequate to ensure that question papers cannot be leaked out from the printer.

“Challenges that have recently emerged have been directly linked to breaches of trust by field personnel at storage stations. The suspects have been arrested and publicly arraigned in courts of law; my appeal is to all stakeholders and general public to recognize examination malpractice as a serious vice and a form of corruption and to support UNEB to fight it,” Odongo noted.

The Minister, Rosemary Seninde appreciated UNEB for releasing the Examination timetable so as to give time to candidates to address any challenges they might face as a result of registration.

Seninde called upon all head teachers to give an opportunity to girls that might have erred and got pregnant to sit for their examinations. 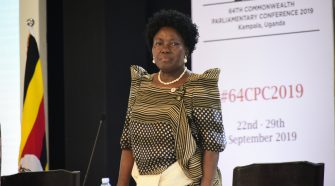