The UN Refugee Agency in Uganda has provided 10,000 blankets and 2,000 plastic tarpaulins to Ugandans who have been recently affected by floods/ landslides in the sub regions of Elgon, Teso, Bukedi and Karamoja.

The donation was announced in a statement released by UNHCR on June 29 and it will support a total of 10,000 affected individuals.

The donation is a response to a call for support from the Minister of State for Relief, Disaster Preparedness and Refugees Hon. Musa Ecweru.

While describing the magnitude of the disaster, Hon. Ecweru said that “Over 180,000 Ugandans are affected by the floods. 9,500 are displaced, 120145 households have been destroyed, 325,000 acres of land have been submerged and roads washed away”.

“The most urgent needs of the affected population are shelter, harvesting-drying materials (tarpaulins, tents, blankets) water guard tablets and relief food,” he added.

While handing over the items to the Uganda Red Cross Society in Kampala, UNHCR Country Representative in Uganda Mr. Joel Boutroue said “as UNHCR, we are here to support the Government of Uganda and her people. When a disaster like this strikes we join hands to respond to the life threatening emergency”.

“UNHCR will deliver the items to locations designated by the Uganda Red Cross to ensure real-time distributions.”

Minister Echweru said at the time that the food relief items were sent to the districts of Katakwi, Amuria, Ngora and Bukedea. 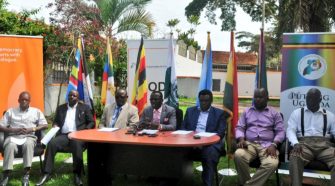