Uganda Peoples’ Congress (UPC) party President, Jimmy Michael Akena has noted that the decision to set Shs 20m as nomination fees for all party presidential aspirants is aimed at raising enough funds so as to organize credible elections.

Last week, the party Secretary General, Fred Ebil released the new party elections road map and those interested in running for party Presidency shall pick and return nomination forms from June 29th to 3rd July and will pay Shs20m as nomination fees.

On learning about the development, some party presidential hopefuls have come out accusing the incumbent President of ringfencing the position and stifling internal democracy.

The would-be competitors including Denis Enap and Tom Omino noted that the nomination fees set is unjustifiable and a clear indication that Akena is not a democrat and fears any health competition.

Speaking to SoftPower News, Akena has noted that the accusations against him by his political challengers are unrealistic, noting that the party needs to raise enough funds to organize the said elections.

Akena said the Party Constitution provides for elections to take place in all the 135 Districts of Uganda and the party currently has limited funds yet the elections cannot wait until there are sufficient funds.

“We cannot choose the circumstances under which we are to operate but this process is made more difficult under the present conditions. The Party needs to produce ballot papers and other elections related material as well as provide for an Elections Supervisor/Presiding Officer,” Akena said.

Akena added that the Shs 20m nomination fees works out at approximately Shs150,000 per district to facilitate matters related to the elections.

Commenting on the same, the Party Secretary General, Fred Ebil Ebil, told SoftPower News that the Nomination fee set is not about leaving room for the incumbent but rather the party Cabinet thought it wise to set Shs 20m so as to attract serious party members to stand for presidency.

“When you go to EC, you will also part with Shs 20m so you should be having a big capacity given the fact that these general elections campaign are to be scientific which requires a lot of money,” Ebil said.

Asked whether this is not monetizing politics, Ebil noted that, “We are just trying to get serious people with serious back ground to contest for Presidency, if you can’t manage, go to a lower level.” 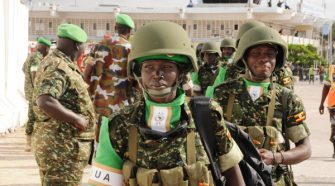