Uganda People’s Congress (UPC), one of the Uganda’s oldest political parties now in opposition will August 1 convene a Delegates Conference which will among others decide on whether to field a presidential candidate or not.

In the last general elections in 2016, the party under the leadership of Jimmy Akena, the Lira Municipality MP and a son to the party’s founding father (Milton Obote) decided not to field a presidential candidate but advised their members to be free to make their rightful choice.

At that time, Akena who had just assumed the party leadership noted that he needed time to build the party but would offer himself to run against the ruling NRM President, Yoweri Museveni in the next general elections which are now only months away.

Addressing the media on Wednesday, the Chairman of the UPC Electoral Commission, Hajji Mahmoud Kazimbiraine noted that Akena has been successfully nominated as the Party President by the District Conference elections and is now forwarded to the Delegates Conference for final approval and endorsement as provided by the party constitution.

Kazimbiraine said that Akena was nominated by 84 percent of 135 districts that participated in the district conference elections.

Kazimbiraine noted that Akena has thus been forwarded to the Delegates Conference for elections as party President on August 1st, 2020.

Asked whether Akena will automatically stand for the national presidency as the party flag bearer as provided for by the party Constitution, Kazimbiraine noted that this will be determined by the members of the Delegates Conference.

“As provided for by the party Constitution, once Akena is voted for as the party president, he must carry the party’s presidential flag but in case he has any objections, he can express himself before the delegates and may decide otherwise,” a source told SoftPower News. 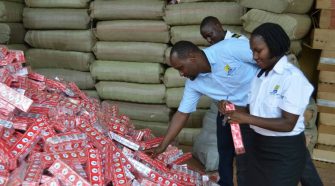 Govt to Implement Digital Stamps this April Starting with Cigarettes