Uganda Peoples Congress (UPC) has expressed reservations over the reported talks and signing of a Memorandum of Understanding (MoU) between four-time Presidential candidate, Dr. Kiiza Besigye and President Yoweri Museveni.

The reaction by UPC followed a news article carried by Daily Monitor on Wednesday which reported that Museveni and Besigye are in secret talks discussing the post 2016 general elections.

The article indicates that the two dissenting politicians have agreed and appended signatures on five key issues to inform talks. Top on the agenda is an audit of the 2016 presidential election results.

However, addressing the media on Wednesday at Uganda House, the UPC spokesperson, Michael Osinde said that the talks between two people can not solve Uganda’s political question but will only benefit the two participants.

“The talks between the two could be addressing a different agenda and not to the benefit of all opposition players in the country and that is why we insist on having an inclusive dialogue,” Osinde said.

When two people meet, it doesn’t represent the position of all Ugandan, he added.

“As opposition, we have never agreed to field one person as our leader for any dialogue. We are all equal before the law and we should have an input in shaping the future of our country.”

Osinde said that the party maintains her original position of calling for an inclusive well structured dialogue to address the social, economic and political impact caused by the recent chaos in Kampala and other parts of the country with the view of improving the country’s image.

He as well congratulated FDC for coming back to the light of championing dialogue instead of fronting defiance.

This follows the several engagements that the current FDC leadership is holding with the Inter-Religious Council of Uganda in bid to fooster dialogue.

“We appreciate FDC for realising that defiance can’t solve the problems in the country and have now seen the light and embarked on dialogue and we welcome them, dialogue is not weakness but strength.” 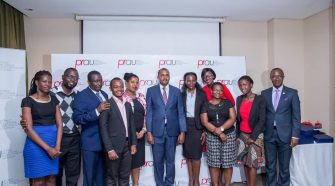 PRAU Nite to Focus on Crisis Management in Digital Era, a Case of Banking Sector