Journalists who had gone to cover the party event at the party headquarters on 6th Floor at Uganda House building were denied entrance by Police without any clear reason but kept around waiting for the party leaders to advise otherwise.

On arrival of the party Secretary General, Fred Ebil and the party Spokesperson, Michael Osinde Orach, Police told them that they could not address the media without clearance after inspection of the SOPs.

“Let’s try to cooperate, we are not trying to stop the party activities but we are only telling you that you needed to inform us of the event so that we inspect the venue and ensure that the COVID-19 SOPs are respected and implemented,” Mugisha the OC Nkurumah Road Police post told UPC leaders.

The leaders later agreed with the Police and were allowed to briefly address the media from Uganda House compound.

During the address, the Secretary General, Ebil released the party revised roadmap to internal elections detailing the activities and dates when they would be held.

Ebil said those interested in running for party Presidency shall pick and return nomination forms from June 29th to 3rd July. The campaigns for those who would have returned forms shall begin from July 4th to July 15th.

Ebil added that there shall be picking and returning of nomination forms for all aspirants at their respective levels from July 29th to August 22nd.

The Party SG noted that the party shall hold scientific campaigns as guided by the Electoral Commission but will have holding the polling in a conventional manner. 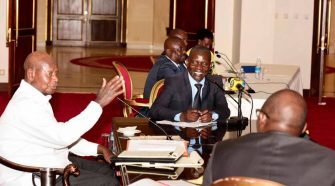