Uganda Peoples’ Congress (UPC) has slammed opposition party, the Forum for Democratic Change (FDC) for what it called fueling anger among Ugandans which has resulted into the deaths of several Ugandans under the guise of ‘Defiance campaign’.

UPC was responding to the isolation campaign that was launched on Monday by the FDC president, Patrick Amuriat who called upon all Ugandans to isolate the MPs that voted in favor of the removal of age limit as well boycotting from buying goods from their businesses.

Addressing the media on Wednesday, the UPC Spokesperson, Michael Osinde said that, “Even when you go to the ground now, you will find out that the population is already charged up against their legislators which has created tension; now if there is already tension what new thing are you bringing on board apart from just being opportunistic with selfish motives.”

“If you are a leader and you already see tension prevailing in the country, do you again call for more tension as if you want to see another Luweero war that claimed many innocent lives,” Osinde added.

“Do you now want people to kill each other because of the decision that was taken in Parliament; the issue should be how we get the country out of the mess that we are in and not again fueling anger.”

Osinde thus justified the need for a national dialogue in the current situation so as to restore peace within the country.

“Such strategies come from a person that is ready to take over power like UPC and not someone who just wants to be recognized and use things that can lead to death of another Ugandan.”

“UPC totally disagrees with the position that was set out by FDC to maintain the prevailing disunity among Ugandans. This can be solved through engaging in dialogue, setting up a referendum as well as setting up a constitution review commission.” 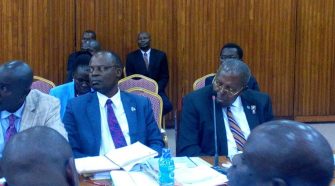