The Uganda Peoples Defense Forces (UPDF) has refuted media reports that the army plans to deploy in neighboring Kenya following the pockets of post-election protests that broke out in the country.

In a statement released on Sunday, the UPDF spokesperson Brig. Richard Karemire said that reports by daily newspaper Red Pepper claiming that Uganda was in the process of sending soldiers to boost Kenya’s security were false and misleading.

“UPDF refutes the story in the Sunday Pepper of today 13 August, 2017 alleging that UPDF is on standby to support security operations in Kenya,” the statement said.

“It is also not true that we deployed after the last election and evacuated the Kenyan president to Uganda. There are absolutely no such preparations and no team of officers has been sent out to Kenya in preparation for such.”

The UPDF spokesperson stated that Kenya is a sovereign country which is capable of ensuring its security and that of its people. He revealed that the government of Uganda had neither received a request for deployment nor was there a situation necessitating the deployment.

Brig. Karemire added; “The Kenyan people have spoken about their choice of government through their recently concluded elections.”

“We however, reiterate our commitment to work with all our fraternal neighbours within the existing frameworks such as the East Africa Community (EAC), East African Standby Force (EASF)”

Protests broke out in townships of Kibera and Kisumu outside Nairobi on Friday after the Kenya’s electoral body announced the incumbent Uhuru Kenyatta as President-elect. But opposition candidate Raila Odinga rejected the results claiming they were fraudulent.

Security forces are reported to have shot dead at least 16 people including a nine year old girl since Friday according to AFP news agency. 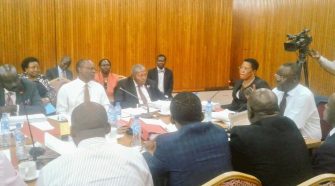