This is according to a statement released Thursday by the UPDF. It comes four months after President Yoweri Museveni passed out over 6,000 LDU recruits, who had completed a 16-week training at Kaweweta Military School.

The President assured the country of continued peace and stability, indicating that these LDUs will be helpful in fighting urban crime.

The next phase of the recruitment exercise will begin July 15 until July this year and is aimed at enhancing the existing foundation security arrangement in the country to ensure the people and their property are secured at grass root levels.

Recruits will receive 4 months basic military training from UPDF training schools. Upon completion of their training, the LDUs shall be deployed to serve in their respective districts of recruitment.

For one to be eligible to join the exercise, they must be citizens of Uganda and in possession of an original national identity card.

Candidates are also required to be healthy and medically fit, ready to undergo medical mental and physical body check as well as a road run, to test endurance and body fitness.

One must also be adult male or female between 18 to 35 years, and should have attained a minimum formal education of P.7 (PLE) and maximum of S.4 (UCE).

Those interested will be required to present duly signed letters of recommendation from their respective LCI Chairpersons, PISOs and GISOs and they must prove they are residents of that particular area.

Individuals with a previous criminal record will not be eligible for recruitment.

The UPDF also stresses disciplined as a key attribute for those seeking to enlist.

“Any presentation of forged documents is criminal, and culprits will be liable to prosecution,” the statement reads in part.

The UPDF says recruitment schedules will be available in local newspapers and are already running as radio announcements in the respective regions/districts of recruitment.

The schedules are also available at the district and sub-county headquarter notice boards.

“The recruitment exercise will be conducted with the support of sister security organs and District leaders at all levels. We appreciate the overwhelming support these partners have offered to our teams in the past recruitments and request for the same spirit so that we can jointly make this exercise a success,” read the statement. 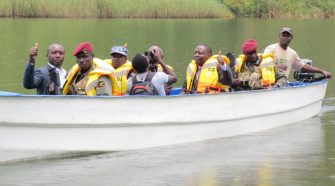