The marks, accessories, insignia, decoration and its uniform of the Uganda People’s Defence Forces (UPDF) have been gazetted which by implication makes these the property of the State or classified stores and illegal for anyone to possess them unlawfully.

The uniform and accessories of the defence forces were gazetted under General Notice No. 1013 of 2019 issued under the UPDF Act of 2005. The Notice details components like the military tunic, ceremonial uniform, tuck-in uniform, fatigue dress, combat uniform, headgears, as well as pips, crowns and chevrons.

The other components are backpacks, footwear, cap badges, the flags for the different UPDF Divisions (Land Forces, Air Forces, Special Forces) and their logos. The gazette also includes the logos for the different army training Schools and Colleges.

The UPDF spokesperson, Brig Richard Karemire said the gazetting of uniform manifests the commitment to define identity and outlook of a professional army as well as adhering to the East African Community (EAC) protocols.

The dress code for the UPDF has been gazetted. the action was endorsed by the top organs of the army which also commended the dress committee for concluding the task assigned to it years back. this development is a milestone in the long history of the UPDF.

The notice is signed by Adolf Mwesige, the Minister of Defence and Veteran Affairs.

“The public is herby informed that the marks, accessories, insignia, decorations and uniforms specified in the Schedule to this Notice are property of the State or classified stores and anyone found in unlawful possession, selling or dealing in them shall e prosecuted under the Uganda People’s Defence Forces Act, 2005,” the Notice states.

The same Notice prohibits the sell, offer or exposing for sale or use of as well as manufacturing of any UPDF uniform unless if granted authority by a competent military authority.

It also prohibits wearing or use of any decoration supplied or authorized for use by any member of the defence forces or any decoration so nearly resembling that decorations and likely to deceive the public.

“Members of the Uganda People’s Defence Forces (UPDF) shall wear or use the marks, accessories, insignia, decorations or uniforms in the Schedule to this Notice in accordance with the UPDF Standing Orders issued by the Chief of Defence Forces”.

The shirt is light olive green for strategic and Land Forces, light blue for Air Forces and brown shirt for Special Forces Command.

The tuck-in uniform is also described in the Notice as an office working dress for the Defence Forces. This one comes with a head gear (beret) with a UPDF logo.

The UPDF Battle Dress Uniform combat is an operational dress in camouflage, 98 digital print for Land Force, Air Force and Marine. The combat uniform for Special Forces Command is the pocho in either woodland or desert camouflage or plain army green shades.

Regarding headgear, UPDF has gazetted berets in colors of maroon, red, green, black and navy blue. The other headgear is the ceremonial forage cap as well as the baseball caps. The footwear includes the jungle boots, gum boots of army green color, ranger boots and ankle boots in black color. 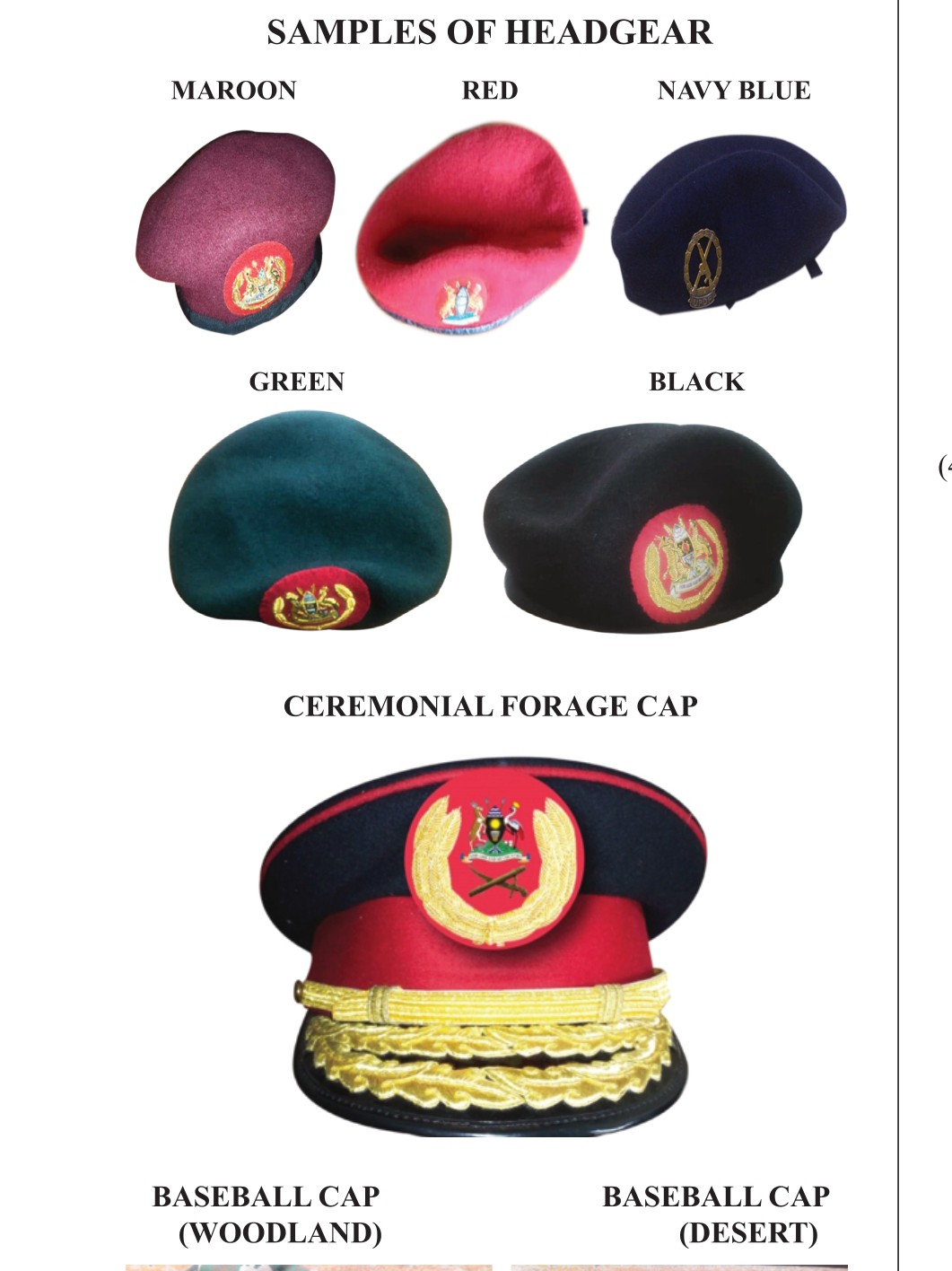 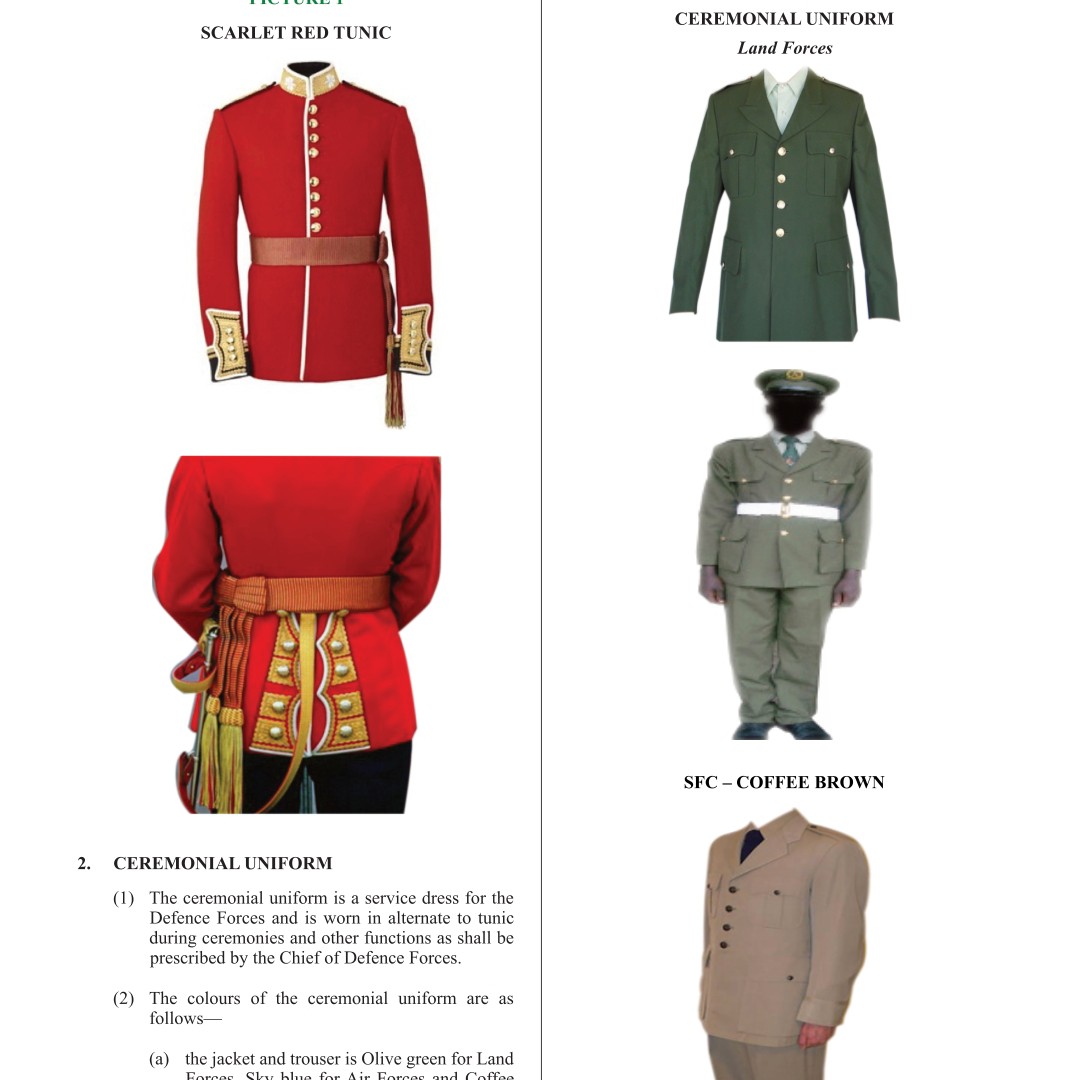 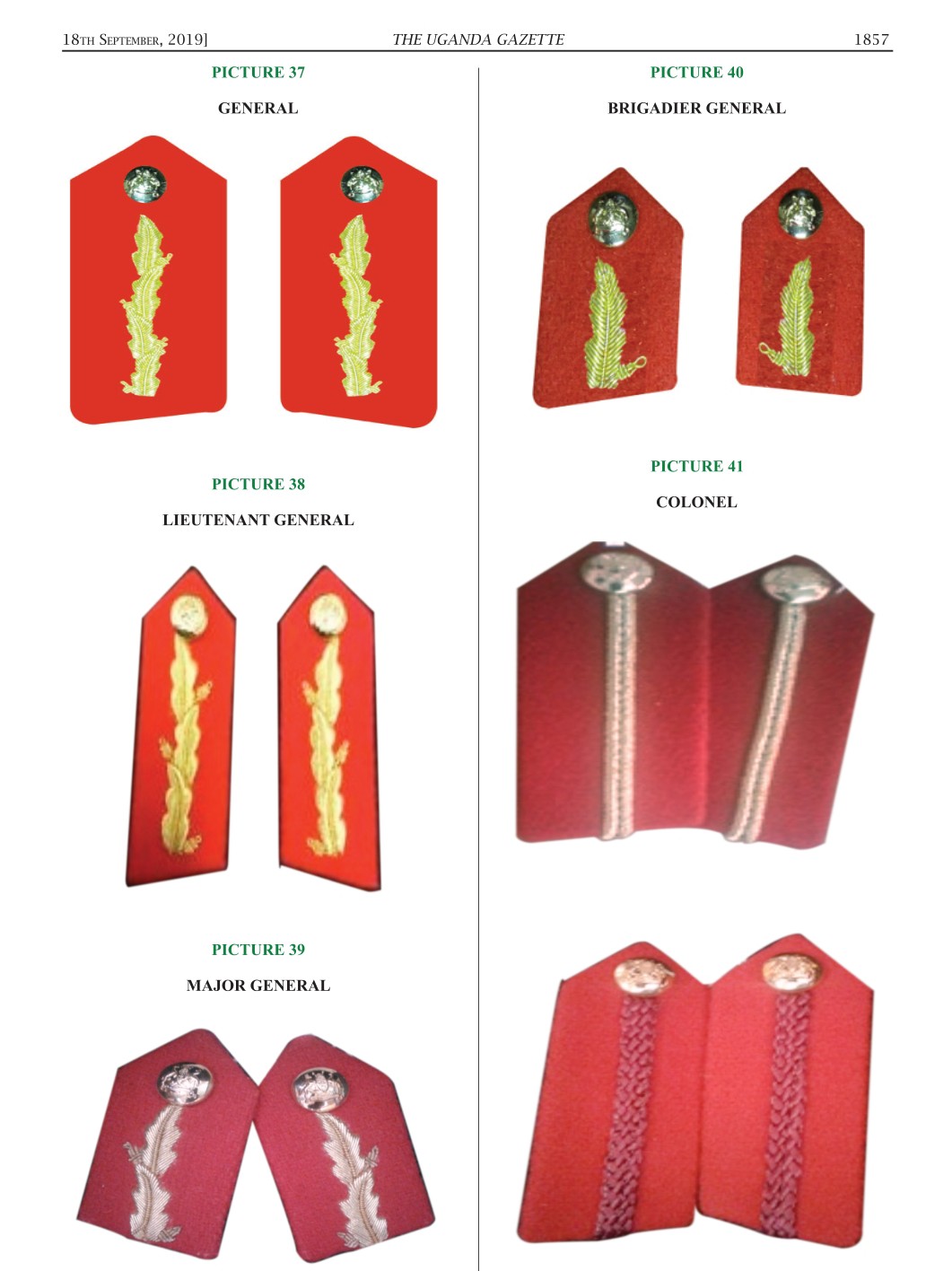 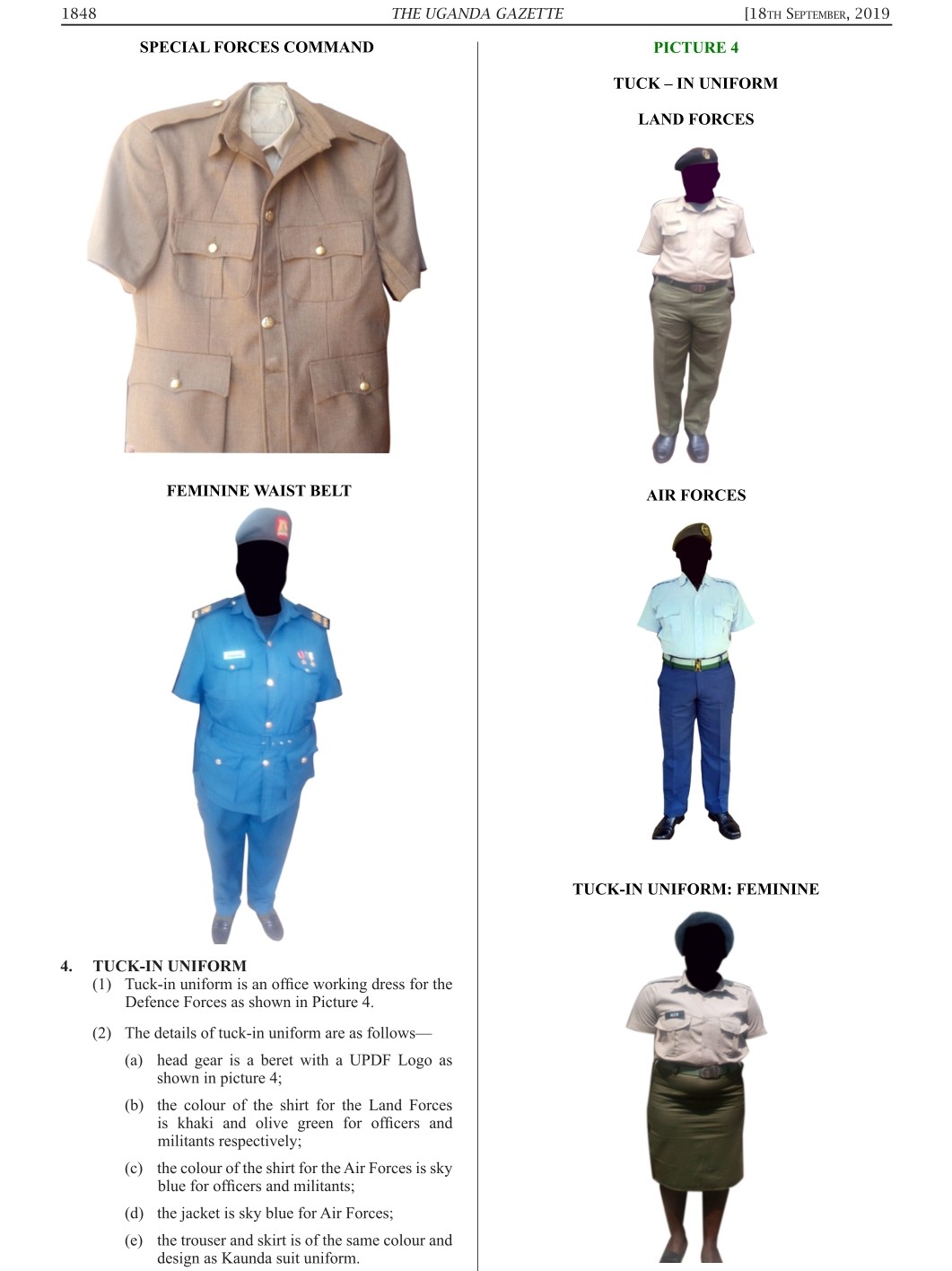 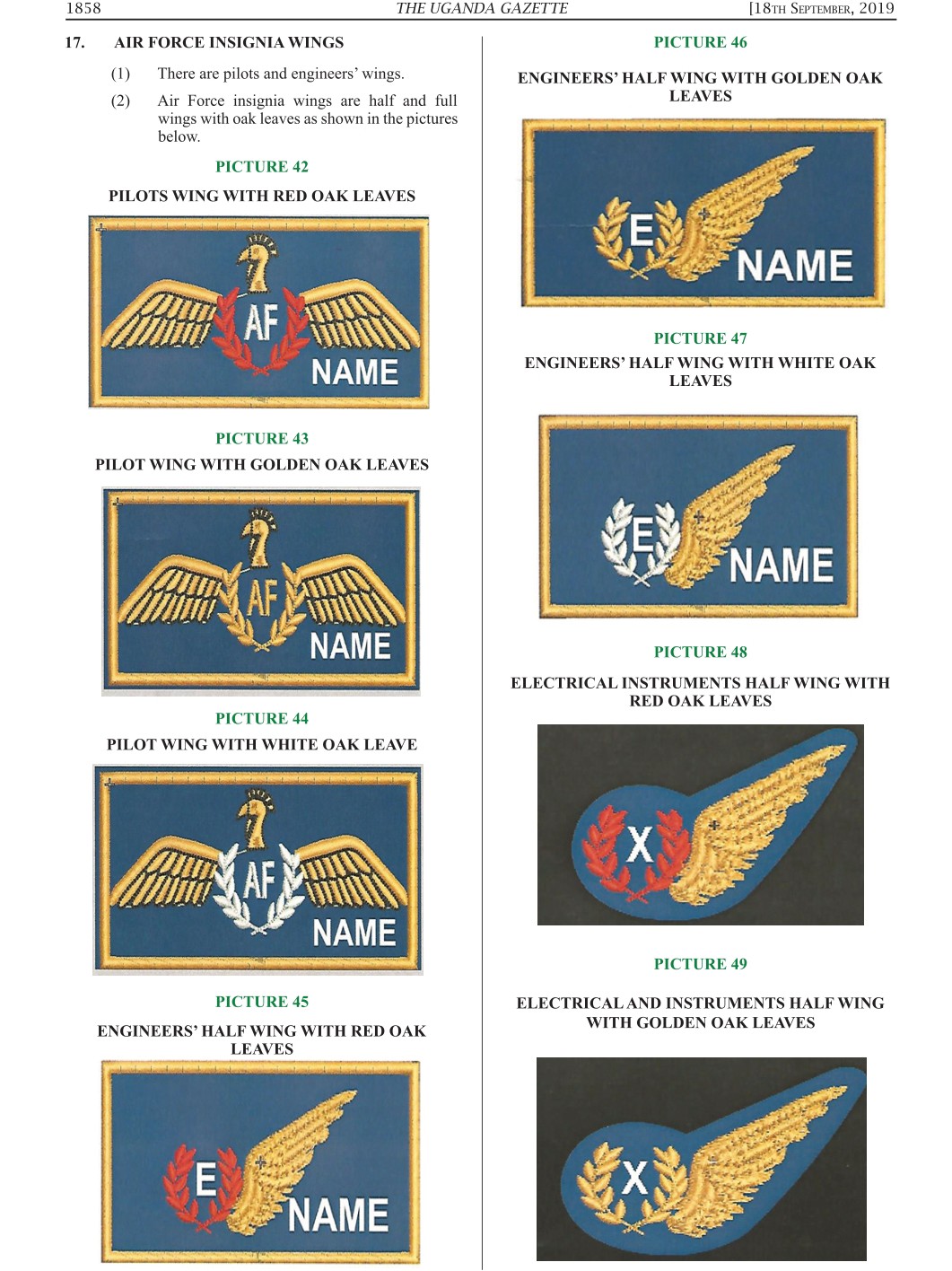 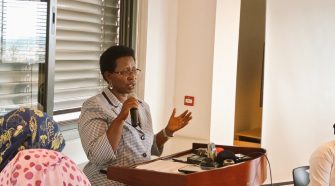