As social media continues to be used to expose injustices and ills in communities by companies and individuals, the latest reputable organisation is tax body, Uganda Revenue Authority (URA).

On Sunday afternoon, a video clip made rounds on social media showing reportedly, URA staff leaving a number of clients on counters and joined one of their colleagues to celebrate birthday.

The clients are seen standing helplessly and visibly stranded a while as they stared at the jubilant staff.

Now, in a tweet, URA has described the incident as unfortunate and says, it has already lodged investigations into the matter.

“We deeply apologise to our clients for this unfortunate experience. We are investigating this matter. URA is a client focused and responsive organisation and this is not the URA way,” reads a tweet by the tax body.

“We assure our clients great customer experience always. It is because of you that we exist,” it adds.

This is not an isolated case, in February this year, Uganda’s ambassador to Burundi, Matayo Kyaligonza and his bodyguards were filmed while allegedly assaulting a female traffic officer in Seeta Mukono district and the video clip widely circulated on social media.

One of the soldiers was seen grabbing the traffic officer by the collar as a seemingly angered Gen Kyaligonza points his hand at her.

UPDF immediately apologised and the matter is currently in Court.

Also, last month, NBS TV presenter, Samson Kasumba tweeted a photo of himself seated on a chair in the median strip (referred to as green belt by KCCA) during a broadcast, a move that attracted massive condemnation by city authorities in another tweet.

“.@nbstv @KKariisa do you condone this kind of indiscipline by your staff? When you broadcast in a greenbelt, what kind of message are you relaying to the public— that trespass is okay?” the tweet by @KCCAUg read.

“Samson, be cautioned that trespass is abuse of the law & undermines our beautification efforts!”

But the KCCA’S response would instead attractive criticism from the public on twitter accusing city authorities of pettiness when there are more pressing issues to be addressed in the city.

The most recent incident was of a driver of a vehicle carrying poles and driving recklessly along Gulu-Kampala highway. His videos was widely circulated on social media.

He is currently on the run but Police said he is wanted to be charged with misuse of the road and dangerous loading. 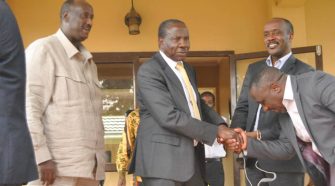