K2 Telecom service centres were closed last week by the tax body for defaulting on it tax obligations, URA have confirmed.

“It is true. K2 Telecom was closed last week. It has a debt of PAYE totaling Shs 77.8m and it also have a debt of local excise duty of Shs 17m,” Rumanyika said.

“We have had a long discussion with K2 Telecom from 2013 until we realized the Memorandum of Understanding we had with them had not been respected,” he added.

As a result, he said, URA had to closed the telecom whose active subscribers as of of last year were estimated to be 156,000 out of the 649,000 registered subscribers.

“We hope they come back to the table, and probably clear their debts, then we can open them,” Rumanyika said.

The Buganda telecom company has been struggling since it opened in 2013 with occasional sustained network interruptions.

Last year, the K2 Telecom network went off for over a week in what the management said was a technical problem. They said that their host, Smart Telecom and Uganda Telecom had failed to resolve the issue.

At one point the telco was forced to close its customer care center in Masaka over rent related problems.

Majority of the K2 Telecom subscribers are from the Central part of Uganda who owe allegiance to Buganda kingdom. 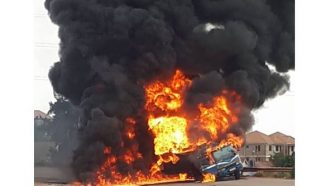 Fuel Truck Catches Fire Along Northern Bypass, Nobody Was Injured