Appearing before the Parliamentary Finance committee, URA officials led by the Commissioner General Doris Akol said there has been an increase in revenue collection and improved tax administration due to the scanners that were installed at Busia and Malaba borders last year.

Akol explained that the new scanners will be connected to existing systems like the Automated System for Customs Data (ASYCUDA) World, a customs system used by importers and exporters in different parts of East Africa to clear goods before they reach their destination.

“We have been able to generate extra revenue for example, out of the Shs 86bn provided last year, we bought two scanners and deployed them at Malaba and Busia and they are operational. In just half a year from July to November, we have collected an extra Shs 12bn and the cost of the scanners was Shs 15bn, which is evidence for the value for money,” Akol said.

She noted that the Authority needs not less than 5 scanners so as to deploy more at the Airport and on other boarders like Elugu, Katuna so as to experience increased revenue.

The officials added that through the customs clearance interventions on the border points, a total of Shs 21bn was collected through intercepting direct smugglers.

“We have limited e-seals which were only able to track 20 percent of the cargo and in 2018, 20,000 containers were tracked and as a result, Shs 2.6bn goods were protected,” Akol said.

She highlighted that the Authority is having a funding gap of Shs 66.4bn for underfunded and unfunded interventions.

“This includes e-Tax 2 phase 1 expenses of Shs 8bn and Shs 1.25bn for next generation of efficiency and revenue reforms,” Akol noted. 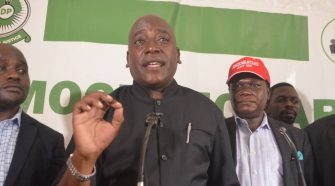