The Attorney General, William Byaruhanga has written to the Minister of Finance reiterating an earlier position by Deputy Attorney General, Mwesigwa Rukutana that the Ministry lacks the grounds or authority to apply to court to have the Official receiver, Bemanya Twebaze replaced as Administrator of insolvent telecom firm, UTL.

Byaruhanga’s letter dated July 1 is in response to a letter written to him by State Minister of Privatization and Investment, Evelyn Anite asking him to urgently apply to court to have Bemanya replaced.

In the letter, Minister Anite said government has encountered considerable difficulty dealing with the Administrator and has completely lost confidence in his ability to continue to serve the role of UTL Administrator.

“The purpose of this letter is to request you to urgently apply to court to replace the current Administrator within the the context of section 172 of the Insolvency Act, 2011 and the Insolvency Regulations (161 (1)),” Anite added.

“I will be pleased to swear an Affidavit to support the Application wherein the supporting reasons will be elaborated. I implore you to have the petition filed without any delay to ensure that the Administration of the Company progresses without any issue”.

Deputy Attorney General, Mwesigwa Rukutana responded stating that the Ministry of Finance lacked the locus to apply to court for removal of Bemanya. He also warned Anite against interfering in the Administration of UTL which he said could potentially hinder the sourcing of an investor.

Now, the Attorney General, William Byaruhanga has in his letter to Finance Minister, Matia Kasaija said: “I am privy to instructions from the Hon Minister of State for Privatization and Investment to myself to urgently apply to court to remove the Administrator from his position. I have duly considered your request and analyzed the Law applicable in such situations”.

He quotes Section 174 (1) (c) of the Insolvency Act which provides that a creditor would be the person listed as competent to apply to court to remove an Administrator from office. Byaruhanga adds that an application would be made to court illustrating failure by the Administrator to comply with the duties imposed upon him by the Administration Deed, the Insolvency Act or any other law or any orders or directions of court.

“The Minister of Finance as a shareholder of UTL has no locus to apply to court to remove the Administration and any such application is bound to fail,” Byaruhanga said in the letter.

However, he added that given the fact that amongst UTL’s creditors are different government parastatals, the Minister may choose to request them to pursue this opinion only if there is evidence that the Administrator is not complying with his duties under the Administration Deed, the Insolvency Act or any other law or orders or directions of court.

Locus standing in law means the ability of a party to demonstrate to court sufficient connection to and harm from the law or action challenged to support that party’s participation in the case.

The Attorney General said the Administrator is only bound to make reports on the progress of administration to the creditors of the company and furnish copies to court, the official receiver and the Registrar of Companies.

“Therefore, it is my view that during the period of administration, the progress of the process can be ascertained from the reports furnished to the above named parties under the law. However, I am of the considered view that an audit of the administrator’s activities can only be undertaken upon conclusion of the process which in this instance expires on 22nd November 2019″.

He further states that at that point, it is the audit that will establish if the Administrator’s actions were all in accordance with the duties and obligations under the deed.

Byaruhanga also informs the Minister of Finance that “it is important to note that under Article 163 (6) of the 1993 constitution, the Auditor General shall not be under the direction or control of any person or authority while performing his functions”.

“Given that the Auditor General has already declined to carry out an audit and stated his reasons, it would be contrary to our constitution to direct him to do otherwise”.

SoftPower News has it on authority that the matter of UTL is on the agenda of a cabinet meeting today, Monday. 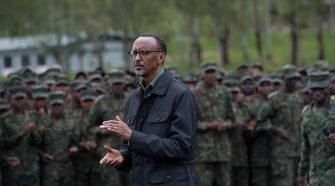