A concerned citizen has written to the Inspector General of Government, Irene Mulyagonja asking that her office initiates an investigation into what he says is the disproportionate wealth amassed by senior government officials including the Attorney General, his Deputy and the Secretary to the Treasury.

The complainant alleges in his August 19 letter that the Attorney General, William Byaruhanga, his Deputy, Mwesigwa Rukutana and Secretary to the Treasury, Keith Muhakanizi have vested interests in the liquidation of insolvent telecom company, Uganda Telecommunication Limited (UTL).

“The mentioned above public officials have been on record disagreeing to audit into Uganda Telecommunication Limited (UTL). Recently, court directed that audit into UTL should instead happen and close within 30 days starting from mid of July 2019,” Semwanga Davidson wrote in his August 19 letter to the IGG, a copy of which SoftPower News has seen.

Semwanga notes that he and other citizens are bothered that some public officials are opposed to an audit on UTL.

“The only logic is that they (officials) are hiding something. These people have been at the center of most liquidated public assets in their lifetime of public service,” he states.

“For examples, Rukutana owns companies that export labor out of Uganda to the Middle East and Asia. Many girls exported by his companies have been exploited and their rights abuses”.

The complainant further alleges that Attorney General, William Byaruhanga has bought land in front of his Rwenzori courts buildings and that he wants his law firm to manage UTL affairs.

In June, Anite wrote to the Attorney General arguing that government has encountered considerable difficulty dealing with the Administrator and has completely lost confidence in his ability to continue to serve the role of UTL Administrator.

She said a decision had been taken to remove Bemanya as the current Administrator of UTL and to immediately replace him with an individual that the Ministry will indicate.

As such she asked the government lawyer to urgently apply to court to replace Bemanya within the context of section 172 of the Insolvency Act, 2011 and the Insolvency Regulations (161 (1)).

However, in response, Deputy Attorney General, Mwesigwa Rukutana warned Anite to cease interference into the administration of the telecom. Rukutana said continued interference risks attracting liability to government since it could inhibit sourcing of a viable investor.

Days later on July 11, the Attorney General wrote to the Minister of Finance reiterating an earlier position by Rukutana that the Ministry lacked the grounds or authority to apply to court to have the Official receiver, Bemanaya Twebaze replaced as Administrator of insolvent telecom firm, UTL.

“I am privy to instructions from the Hon Minister of State for Privatization and Investment to myself to urgently apply to court to remove the Administrator from his position. I have duly considered your request and analyzed the Law applicable in such situations,” the Attorney General said.

He quoted Section 174 (1) (c) of the Insolvency Act which provides that a creditor would be the person listed as competent to apply to court to remove an Administrator from office. Byaruhanga adds that an application would be made to court illustrating failure by the Administrator to comply with the duties imposed upon him by the Administration Deed, the Insolvency Act or any other law or any orders or directions of court.

“The Minister of Finance as a shareholder of UTL has no locus to apply to court to remove the Administration and any such application is bound to fail,” Byarugaba said in the letter.

The order was issued by Justice Musa Ssekana of the Civil Division of the High Court in the application filed by Uganda Broadcasting Corporation (UBC) against the Administrator of UTL. UBC applied to court in its capacity as one of the creditors to UTL.

Anite had in a letter said UBC’s application to court was in bad faith and that the broadcaster was being used as a pawn. She, nevertheless, was the first to celebrate when UTL creditor UBC’s application for audit was granted.

Court ordered for an audit to be carried out on UTL which is in Administration, by the Auditor General within a period of 30 days from the date of the court order.

Furthermore, court directed that an audit report be presented to all the creditors of the company. 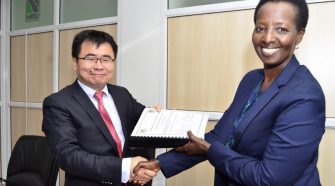