Countrymen, Countrywomen, especially the Bazukulu (grand-children). Greetings. The elections in Arua Municipality were held peacefully because the organisers of violence and criminality had been arrested.

The independent, the Hon. Kassiano Wadri, was declared the winner and the Hon. Nusura Tiperu of the NRM was number two.

This is a step-forward, to have elections without violence, without threats. Nobody has got a right to intimidate a Ugandan by word or action.

Nevertheless, the violence of the previous days had had the most negative effect. Out of the 46,000 registered voters, only 16,000 turned out to vote. Only 34% of the electorate. The others either feared to come to vote or the register is full of ghosts.

We are now investigating the allegations that some candidates had imported illegal voters from other areas to the municipality. The Opposition has been doing this repeatedly, such as in Jinja East and Bugiri Municipality.

The NRM agents have got a weakness of not auditing the voters’ registers in time to discover these imported voters. In the case of Arua Municipality, there is an allegation that the illegal voters were brought to the attention of the Electoral Commission but that it did not pay heed.

The culture of violence and cheating in elections must end completely. The cases of Jinja East and Bugiri are in court for that very purpose.

The cases of terrorism, damaging property, manslaughter etc against the Hons: Wadri, Bobi Wine, etc will continue. Their actions led to the death of a Ugandan, injury of a number of others and damage to property, so the allegations go.

All those leaders, including the NRM members, should never encourage their supporters to violate the law, let alone themselves violating the law.

Processions through populated centres without co-ordination with the Police should never happen. I never organize processions. I always drive to and from the rally site in my convoy. Sometimes, only the boda boda riders join me.

The convoy moves fairly fast to the rally site and from the rally site, never touching the passers-by, the property of the people or the convoys of the other candidates.

In the elections of 2016, my convoy to Nambole met the one of Rt. Hon. Amama Mbabazi around the Naguru area. We just waved at one another and that was all.

Why should a Ugandan be beaten, intimidated or have his property or life destroyed on account of politics? With uncontrolled violence in elections, many voters will fear to go for voting. This will mean the disenfranchisement of Ugandans.

Why, then, did the Ugandans shed their blood? It was in order for them to run their country through fair and free elections. I will defend that right today and tomorrow as I did in the past.

On the side of the NRM, many of the actors need to distance themselves from egoism. The NRM is about principles: Patriotism, Pan-Africanism, Social- Economic Transformation and Democracy.

Anybody who supports these, you should support if he/she emerges as the flag- bearer of the NRM. Not to support a flag-bearer for any reason, when you are a leader, is a failure of leadership. When you support the cause instead of supporting individual interests, your contribution will blossom, even if you meet potholes on the way.

This has been my experience in the last 58 years. Support principles, not opportunism, you will triumph in the end. 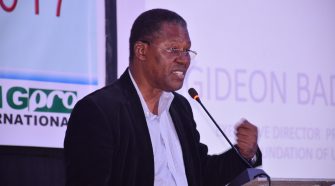