Police have confirmed the arrest of veteran journalist, Joseph Kabuleta on charges of offensive communications against the person of President Yoweri Museveni.

Reports regarding the arrest of Kabuleta began making rounds on social media on Friday afternoon.

Now Police have issued a statement confirming that indeed a team of detectives from the Special Investigations Division picked Kabuleta up and put him under custody.

“He has been apprehended because of offensive communication against the person of the President,” Police spokesperson, CP Fred Enanga said in a statement.

“Section 25 of the Computer Misuse Act 2011, criminalises such acts of communication”.

Police have cautioned the public against glorifying such communication particularly through social media.

Enanga said that though social media is public space, it is not protected.

“Any postings of false fabrications will attract punishment in accordance with the laws”.

The public should think first about what they say on social media, Enanga said, adding that the joint forces will contain it using the acquired capabilities to monitor comments on social media.

He said any offenders will be investigated and punished. 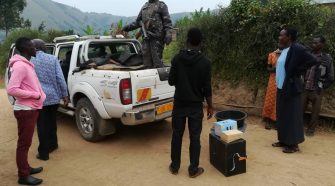