Long serving photojournalist, Peter Busomoke has passed on, reports say. The veteran journalist died at Mulago hospital – Kirudu in Kampala Saturday morning where he is said to have been treating illness.

Busomoke, who has practiced journalism since 1979 was working with Uganda’s state owned newspaper, New Vision at the time of his death. He was still practicing photojournalism and once in a while, he appeared at news events wearing his signature round hat and a press jacket.

Despite his old age, he still maintained a strong passion for the profession of journalism and still managed to beat young journalists at time management by arriving at the venue ahead of the event.

During his long career, he worked with numerous foreign media outlets including BBC, Getty Images and AFP among others. No wonder, when you search his name on Google, you will get endless results of his photos from visiting heads of state, high key political events, reportage on the ADF and LRA wars and human interest stories.

He even took an exclusive picture in 2005 of former South Sudanese Vice President, John Garang boarding the helicopter which would later crash and kill him.

In 1993, when Pope John Paul II visited Uganda, Busomoke was a photojournalist with Focus on Africa, which is now a BBC Magazine and he took photos and sold to different companies.

“It is me who started selling photos at churches at Shs 300 each. I remember a Muslim who bought a photo of the pope kissing the ground, because he was amused to see a Holy Father in a similar posture in which Muslims pray,” the Senior journalist recounted to the New Vision recently, during the newspaper’s 30 year anniversary.

We shall publish details regarding his death as we get them. 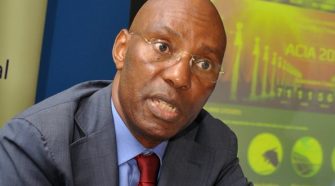