It appears singer and politician, Bobi Wine is still concerned about the criticism he got for his ‘poor’ fiscal policy, he has now put pen on paper to record a song in response.

In what seems to be a musical way of hitting back at his critics, Bobi Wine’s next song could be titled ‘Fiscal Policy’.

This follows his appearance last week on a televised political talk show where his antagonists said he put up a weak performance and failed to explain his alternative fiscal policy.

He was mocked by several Ugandans on social media especially supporters of the ruling government, who say he failed to respond to simple questions on how he will fix the country’s economy in the event that he became President of Uganda.

During the show on NTV Uganda, Bobi Wine was asked what kind of fiscal tools he would use to stop inflation. His response was that he would stop impunity and that in his first 100 days, he would ban the tax on the use of social media.

In days that followed, the Afropop singer told his critics to advise without bringing him down.

“We have some work cut out for us. If we do not want to rise to the occasion and save our nation, let us be slow in criticising those who are sacrificing everything, including potentially their life, to do that work. We can guide and advise, without beating them down,” Bobi Wine who is also Kyadondo East MP wrote in a post.

But it appears he’s not satisfied with that response, now he has chosen “to bring the fiscal to the disco, and break it down for the common man”.

On Thursday, Bobi posted a video on Instagram of him in studio recording what seems to be his next single.

In the song, the 46-year-old legislator wonders why the poverty and cost of living is on a high in Uganda. He adds that if he ever got an opportunity to change the way that his people live, he would abolish the oppressive taxes.

“Reduce the prices and raise the salaries, that would be my fiscal policy,” Bobi sings.

Shortly, after Bobi Wine shared the video, his wife, Barbie too posted the video on Instagram saying: “We are not ready for this one! Nah we are not! New jam alert”.

The song is recorded by producer Dan Magic of Dream Studios with whom Bobi Wine has worked on several music projects.

Who ever thought that politicians would channel their economic policies through a song and that this message would be passed on in even the strangest of places – like night clubs?? This forthcoming political campaign could indeed be one that will have many firsts. 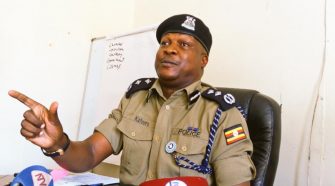