During his Wednesday address to the country on Covid-19, President Museveni promised to share tips on indoor physical activities.

He expressed concern about Ugandans who took to the Northern bypass for group exercises.

“I saw a video of some people walking and running about in groups along the Northern bypass. This is dangerous, it should stop. I will share with you a video of how to exercise indoors,” the President said as he called on Ugandans to avoid public gatherings which can lead to the spread of Covid-19.

The President called out politicians and all other individuals for engaging in activities that can provoke Ugandans into public gatherings. He described the actions as an attempt to cause mass murder.

Now the President has this morning let Ugandans into his day start by sharing photos and a video of doing exercises in his office. In the video, the President warms up before taking to press-ups.

President Museveni is renowned for taking regular long walks which he describes as his hospital.

“In all these years, have you ever heard of Museveni being admitted to hospital? It is because I walk. Walking is my hospital,” the President who often urges Ugandans on healthy lifestyles once stated.

He is an avid advocate against consumption of alcohol and reckless living which may lead to transmission of a host of diseases.

He has on many occassions urged Ugandans on a healthy diet and physical exercises to prevent Non-Communicable Diseases. 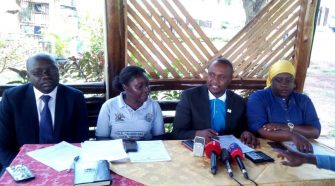