A joint team of the Chieftaincy of Military Intelligence (CMI) and the Police Directorate of Investigations searched Lt Gen Henry Tumukunde’s Kololo-based offices on Friday and recovered military gear and a group of army deserters according to a source who was part of the operation.

Former Security Minister Tumukunde was arrested on Thursday night and Police says he will be charged with treason.

The retired General was whisked off to CID Headquarters in Kibuli for a statement and later taken to SID Kireka.

The treason charges are linked to a series of alleged treasonous utterances in radio and television interviews this week.

At the beginning of this month, Tumukunde surprised many when he announced his intention to run for Presidency next year.

During his press interviews, he among other things said that if he was part of the administration in Rwanda, he would support opposition forces aiming at changing the Kampala administration.

The exhibits include military back bags, tents, attire as well as a number of cell phones.

Another photo shows four men suspected to be army deserters who were found at the offices.

Tumukunde was taken from Special Investigations Unit in Kireka to Kololo to witness the search.

Police spokesperson CP Fred Enangasaid in a statement said that the retired military officer was arrested on allegations that he sought to foster hatred that might lead to inter-community violence, fomenting and glorifying violence in general.

“He in addition, calls on the support of a neighboring country to support him in removing the current leadership with or without the ballot,” Enanga added.

Uganda’s relations with Rwanda have been frosty for more than a year now with a number of Kigali intelligence elements arrested in Uganda and charged with kidnapping of Rwandan refugees and illegally repatriating them to Rwanda as well as compromising Uganda’s security and illegal possession of guns. 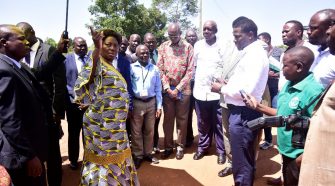