The Security Inter-Agency Joint Task Force on COVID-19 response has Monday arrested 23 people for questioning over congesting in a school-like-dormitory setting within a small house which contravenes with the Presidential directives on curbing the spread of the virus.

The suspects were picked from Nkokonjeru, Nsangi, in Wakiso district and are currently detained at Nsangi Police Post.

The assembly of 23 adult males with no known kinship linkages and their unusual home environment indicate that they could have been engaging in some criminal activities, a matter that Police is investigating.

They will appear in court on Tuesday and they face charges of; doing neglect act likely to spread infection of disease contrary to Section 171 of Penal Code Act; disobedience of lawful order; and any other charges that may arise from investigations.

“The Security Joint Task Force hereby re-echoes the directive of observing social distance and hence passes an early warning to all individuals and companies accommodating in school-like-dormitories and any type of dormitories to immediately disperse to avoid arrest and being charged,” the task force said in its statement.

The team which comprises of Police and UPDF has also reminded the management of factories to ensure the work environment in their institutions are in conformity with the safety directives issued by the President and the guidelines by the Ministry of Health.

“Food market leaders are also beseeched to ensure the traders and their customers observe the safety guidelines against the spread of COVID–19”. 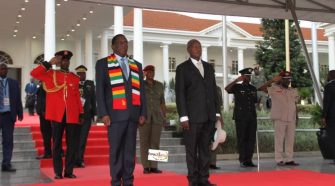