Just hours after confirming that the President signed the age limit Bill into law, MP Simeo Nsubuga has vowed to defeat whoever seeks to challenge the Act in courts of law, saying they have assembled a team of competent lawyers to counter them.

“Now that it is an Act of Parliament, any person or group of persons who are opposed to it just follow the right procedure and go to constitutional court for interpretation,” Nsubuga stated.

“We have ready assembled a team of our senior and competent lawyers to handle our side”, said the Kassanda South legislator in a phone interview with SoftPower News.

Nsubuga, a strong supporter of the Bill also applauded President Museveni for assenting to the amendments and thanked the Igara East MP, Raphael Magyezi for moving a private members bill.

“I thank President Museveni for assenting into law the Constitutional Amendment Act No. 1 of 2017”.

“I also salute Hon. Raphael Magezi who moved the private member’s Bill, colleagues who seconded the motion and all the 317 MPs who supported it”, Nsubuga added.

In August last year, Nsubuga was a victim of an assault by a youth activist known as William Ntege alias ‘Kyuma Kya Yesu’ who roughed him up during Kabaka Ronald Muwenda Mutebi’s coronation anniversary in Mubende district.

Ntege said he attacked Nsubuga for his support for the removal of Presidential age limits.

The activist held the MP by his collar as he stepped out together with other Buganda region MPs to greet the King.

Parliament voted in support of the Bill on December 20, 2017 amidst strong criticism from the opposition and a section of Ugandans with many threatening to put up a legal challenge should the President sign the law.

Some of they key clauses in the Bill included repealing the maximum presidential age limit cap (75) from the constitution and revising the lowest cap from age 35 to 18 and extending the tenure of Parliament and local government leaders from 5 years to 7 years. The law also extended the period to organize fresh polls upon nullification of elections by Supreme Court to 60 days and restored Presidential term limits into the supreme law.

Reports indicate that the President assented to the bill in totally on December 27, making it an Act of Parliament. 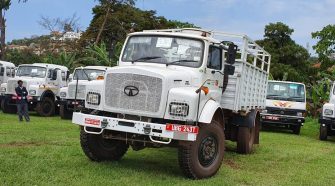 UWA Gets Donation of 5 Trucks from India