“We’ll be Back to Build Infrastructure” – Kanye West, Kim Excite Kids with Sneakers

Kanye West (R) chats with wife Kim Kardashian. In the background, children at their Masulita home sing for them.

Kanye West and his wife, also reality TV star, Kim Kardashian were Tuesday visiting a home for vulnerable children in Masulita in Wakiso district. They were in company of their daughter, North West.

There, they greeted, sang and danced with the little kids. Then they gifted the kids with pairs of new sneakers.

He told reporters there that Uganda is a haven and that it is beautiful.

Kanye said he and Kim would return to Uganda later although he didn’t specify when. The celebrity couple arrived in Uganda last week and have been staying at the pristine Chobe Safari Lodge in Murchison falls national park.

The rapper’s visit to Africa was to rejuvenate his energy as he works on his ninth album ‘Yandhi’ which will be released next month. He said he wanted some of the songs to capture nature.

“We are going to get supplies, architects, resources, teachers, guides, musicians. I’m gonna go get some resolves and come right back,” Kanye said to reporters in Masulita during his visits to the children’s home.

The home is under the auspices of charity organization, Uganda Women’s Effort to Save Orphans (UWESO).

He would later be guided to one of the dormitories by the officials including State Minister for Tourism, Godfrey Kiwanda Ssubi. The Minister told him the centre offers shelter to children whose parents died as a result of the war and HIV/AIDS.

“We are going to build it bigger,” he said, referring to the shelter as officials clapped in appreciation.

This comes a day after Kanye and Kim met with President Yoweri Museveni and promised to build a tourism school which will be a centre of excellence in East Africa.

Tuesday, Kanye wore a neon-yellow tee-shirt written on ‘Saving Lives Changing Lives’ along with shorts and sneakers. He also had a baseball cap.

Much of the time, he was personally capturing the happenings and broadcasting them LIVE on his Twitter channel. A group of Karamajong kids sang to the guests. Kanye said he would use the videos and pictures in his music videos.

But for Kanye, Tuesday’s visit to the needy children was more than that – it was also an opportunity to promote his forthcoming album.

Repeatedly, he played and sang to his ‘We got Love’ song featuring Teyana Taylor. In the song he says ‘love is the new money’ and that ‘home is where the heart is’. 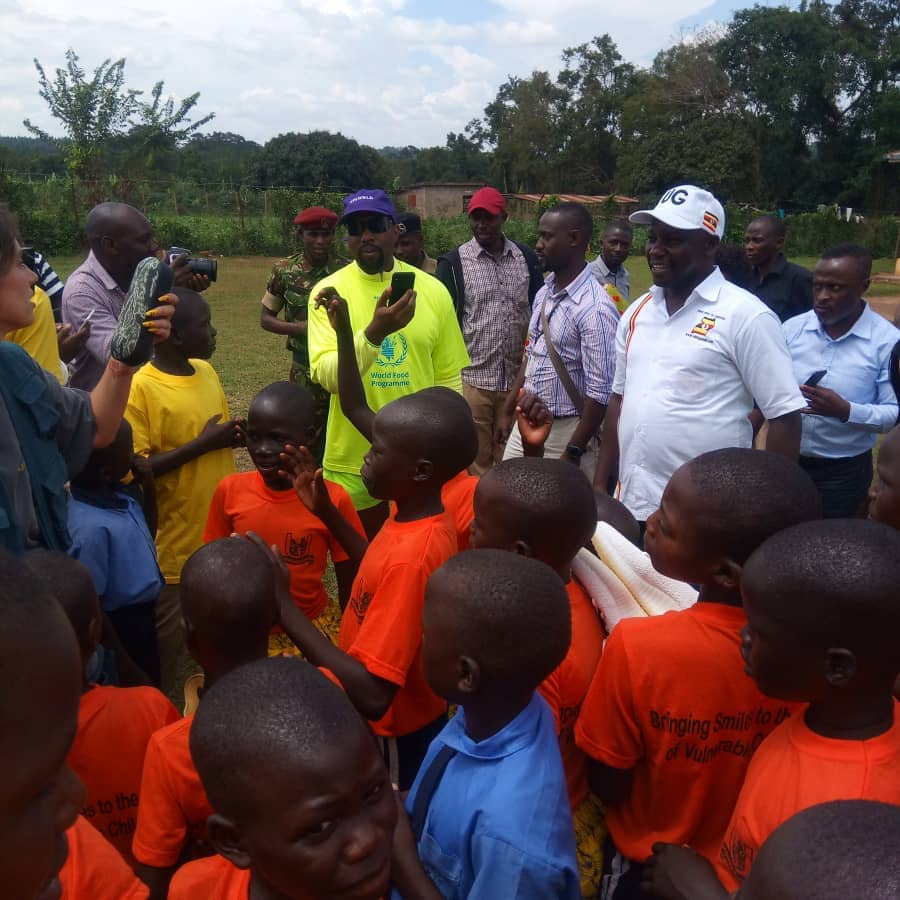