A project supported by United Nations Development Program (UNDP) together with Japan Refugee Project has provided skills in business, income generating projects and employment to refugees in West Nile.

Kazuaki Kameda, the Ambassador of Japan to Uganda revealed this Friday during a visit to Palorinya Refugee Settlement in Moyo district.

The Japanese Ambassador was in Moyo for the closure of the Shs 5.5bn UNDP – Government of Japan funded three-year project.

The project was premised on strengthening the humanitarian-development nexus in responding to the South Sudanese refugee crisis.

It was designed to respond to the urge to the livelihood of both migrants and host communities as a pathway to the genuine humanitarian development.

“The emergency phase which started in July 2016 is nearly over. With about 800,000 South Sudanese refugees remaining in the region, not only humanitarian assistance, but also more development support is direly required,” Ambassador Kameda noted.

“This project is a kind of catalyst to lead the development pathway and I am happy to see the good result of its implementation on the ground,” he added.

Jalwiny Silimani, the Chief Administrative Officer of Yumbe district observed that West Nile is the second poorest region in Uganda.

“We are extremely grateful for Japan and UNDP support which is helping us cope with the situation”.

In April 2018, the Japanese government provided USD 1.5m to UNDP in Uganda for the project to strengthen the resilience of refugees, host communities, district local governments and relevant national institutions to cope with the large influx of refugees.

The project also had a component to support the efforts of refugees and host communities towards a sustainable development path.

The Ambassador revealed that the project has also enhanced the capacity of district governments to lead community engagement, planning, coordination, delivery and monitoring of the refugee response and building resilience efforts.

Furthermore, it provided an Emergency Employment Scheme or Cash-For-Work to the refugee and host communities.

From the pay got from the “Cash-For-Work scheme, the refugee and host communities made savings and received business skills training to develop business plan and through additional coaching they were supported to establish micro-businesses. They also received cash grants for initial investments and formed village saving and loan associations.

“We heard that many community members have managed to establish their own businesses thanks to the cash, training and coaching received during the project. Livelihood improvement is crucial and important in view of the humanitarian to development nexus. I am pleased to have supported this UNDP initiative,” Ambassador Kameda commented.

Puli Alice Bojo, a South Sudanese refugee who has lived in Palorinya settlement in Moyo for two years thanked the people of Japan and UNDP for providing support that will enable most refugees live sustainable lives.

“We are very happy because 30 days of Cash for Work activities really changed our lives and standard of living. Our village groups are starting micro business such as grinding mills, retail sales and a recreation hall. It will change our lives and we shall stand firm to support all our families,” Bojo testified.

Thierry Prouteau, UNDP Programme Specialist for the Emergency Response and Resilience Strategy said the project has provided Cash-for-Work to 1,250 beneficiaries and accompanied 1,066 of them towards the establishment of sustainable income generation means through the creation of various type of micro businesses.

“The second component of the project helped strengthening the capacity of district authorities in dealing with the refugee crisis and improving resilience,” Prouteau explained. 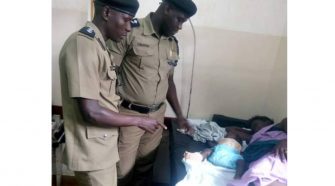 AMURU: Mother, Child Hit by Bullet in Row Between Police and Rowdy Crowd