The World Food Programme (WFP) is warning that 135 million people face crisis levels of hunger or worse, coupled with an additional 130 million on the edge of starvation prompted by Coronavirus.

WFP currently offers a lifeline to nearly 100 million people – up from about 80 million just a few years ago.

“If we can’t reach these people with the life-saving assistance they need, our analysis shows that 300,000 people could starve to death every single day over a three-month period”, David Beasley said.

“This does not include the increase of starvation due to COVID-19”.

The UN agency is appealing for support to curb the looming disaster.

Noting that WFP is the “logistics backbone” for humanitarians and “even more so now for the global effort to beat the COVID-19 pandemic”, the WFP chief urged the UN Security Council to “lead the way”.

“First and foremost, we need peace”, he said.

He asked that all involved in the fighting provide “swift and unimpeded” humanitarian access to vulnerable communities and for coordinated action to support life-saving assistance, along with $350 million in new funding, to set up a network of logistics hubs to keep worldwide humanitarian supply chains moving.

“If we don’t prepare and act now – to secure access, avoid funding shortfalls and disruptions to trade – we could be facing multiple famines of biblical proportions within a short few months.”

He underlined the fact that there’s no time and that action should be fast.

According to the Global Report on Food Crises (GRFC) 2020 released this week this week, from May–June 2020, 1.2–1.6 million people in Uganda will likely face an acute food insecurity crisis or worse.

Uganda’s food-insecure population increased by 27 percent in 2019, the report states, due to continued arrivals of refugees and asylum seekers from neighbouring countries and a particularly severe February–July 2019 lean season in Karamoja sub-region.

The report forecasts that food security conditions are expected to remain precarious due to floods, severe crop damage, and below-average crop production, as well as the potential impact of desert locust infestations on food security.

However, the output of the first season harvest was 10–15  percent below average, according to FEWS NET. Subsequently, the October–December rainy season was characterized by abundant precipitations throughout the cropping period, with cumulative seasonal rains estimated at 40–80 percent above the long-term average over most cropping areas.

The heavy rains had a positive impact on crop establishment and development, and an above-average second season harvest was forecast. However, the torrential rains triggered flooding and landslides in eastern Mount Elgon subregion and in south-western Bundibugyo, Kalungu, Kisoro and Ntoroko districts, affecting about 300,000 people and causing localized crop losses.

In its 2020 forecasts, the report states that Uganda’s acute food insecurity is at minimal levels, thanks to the above-average second season harvest, gathered in January 2020.

However, Stressed acute food security levels in Bundibugyo district are expected to rise through May due to recent floods, landslides and severe crop damage, which left little or no harvests available for own consumption or sale.

“High food prices have forced many households in flood-affected areas to reduce the quantity and frequency of meals. In the agropastoral north-eastern Karamoja region, below-average crop production will result in an earlier-than-usual depletion of household cereal stocks,” the report reads.

However, abundant rains in the second half of 2019 improved livestock conditions and productivity, and an above-average availability of livestock products will maintain acute food security at Stressed levels.

The report adds that refugees from South Sudan and the Democratic Republic of the Congo could face deteriorating acute food insecurity if adequate levels of humanitarian assistance are not provided. 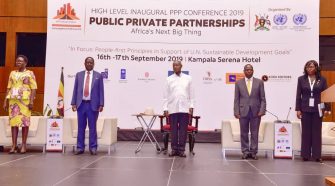