Former army commander, now opposition politician, Maj Gen (Rtd) Mugisha Muntu has cautioned President Yoweri Museveni against referring to the national army as his army, saying this stance defeats the cause he (Muntu) and others fought for.

He says UPDF is a national army and that this is what the many people who served in uniform and others who lost their lives in the process sought to achieve.

Muntu who was army commander for nearly a decade (1989 – 1998) made the comments at a requiem service of retired military officer, Maj Gen Benon Biraaro who died last week. During his remarks at All Saints Cathedral Nakasero in Kampala, Muntu stressed that change and transition are inevitable.

“Change happens. There are people who think change cannot happen. It happens. It’s a factor of life, It’s a law of life. It’s a spiritual law. Nobody is going to stop change when it happens,” Muntu told the congregation.

The Chief of Defence Forces, Gen David Muhoozi and other high ranking military officers were in attendance.

He then hinted on the personalization of the UPDF by the President.

“I have heard General Museveni, the President, the Commander-in-chief, he keeps saying ‘My army, my army’. I don’t know what’s at the back of his mind when he says that. It could be two things – one, it could be psychological warfare. That, I would understand”.

Muntu says when he and colleagues were part of National Resistance Army (NRA), they were not a personal army but rather a national army and they were fighting to ensure it remains national.

“It is a transition, it is a process. When it (army) turned to UPDF that it is now, it isn’t a personal army. It is a national army. And we will do everything humanly possible to ensure that comes into reality”.

The failure of this, he said, would be unfortunate for the individuals who sacrificed to serve the country and those who lost their lives in the process.

He asked Minister in charge of Karamoja, Eng John Byabagambi who was in attendance to deliver the message to President Museveni.

Some opposition politicians have previously criticized the personalization of the army by President saying it makes the UPDF partisan. Four-time Presidential candidate, Dr Kizza Besigye who too was part of the NRA armed struggle has repeatedly accused Museveni of militarizing his government and using the UPDF to remain in power – including during electioneering.

Fresh out of university at Makerere, Muntu, a graduate of Political Science joined the guerilla warfare led by Yoweri Museveni against Milton Obote’s government. He later emerged as the Head of Military Intelligence after the NRA victory in 1986. 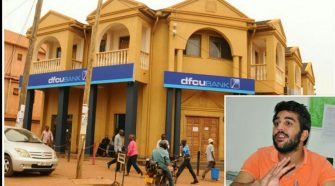