The Uganda Communications Commission (UCC) has instructed all telecom companies to update data of their subscribers regarding simcard registration.

This according to UCC’s Head of Public Relations and International Relations, Ibrahim Bbosa, was reached at after an audit report which cited gaps in the records in regard to the biometric registration.

The companies are now required to validate information already in their possession. In April last year, UCC introduced the biometric verification for simcard registration but only for subscribers buying new simcards, those swapping, replacing and upgrading their simcards.

“Recently, we realized that there is still a section of data that was not yet updated by biometric verification and that is why on March 9, we met with the telecommunication sector, looked at the audit report and the identified gaps,” Bbosa told SoftPower News in an exclusive interview on Tuesday.

According to Bbosa, the gaps include people having their names but different National Identification Numbers (NIN), users having multiple simcards registered on their NIN yet they are not known to the individuals thus prompting the cleanup.

“So, this exercise is only for those people who are notified by the telecommunication operator to update their records. It is not an exercise for everybody and probably that is why you did not see an announcement telling people to go and update their records,” he said.

UCC says the telecom companies are already contacting individual subscribers to move to the nearest service centres with their national identity cards for the verification.

Asked about how the errors could have happened yet a due process was followed, Bbosa said that at the start of the process in 2010, mistakes by the operators could not be avoided due to the huge volumes of data required they handled then. He however says, this is the time to iron out the gaps.

“If there were errors made, whether somebody registered a simcard using a friend’s ID, whether you used a vendor’s ID. Remember in the current registration, a biometric is required which makes it very unique. And the purpose of this exercise is to make sure that those without biometrics are updated using biometrics and people with multiple simcards can confirm that all of the cards belong them,” said Bbosa.

Since this is not the first time Ugandans are told to register their simcards, can’t telecom companies used the data in their possession to switch SimCards with concerns? Bbosa says that is impossible since the companies have no legal mandate to switch off simcards of their clients under the circumstances.

“Under the Uganda Communications Act Section 56, which covers the denial of service, the law only provides for two circumstances under which you can deny a service to a customer and these are non payment of bills and a just cause which has to be interpreted in a legal manner,” said Bbosa.

He added that an operator can’t take an independent decision to switch off someone’s contact.

On why the validation is not done online to ease the process for the clients, Bbosa said: “Currently in Uganda and the world, we are facing a challenge of cyber threats. Every system that is put in place, we have unscrupulous individuals who are also thinking ahead of the system to see how best they can beat it.”

He said as technology advances, fraud and cyber threats also increase, justifying the preference of the analogue process.

Going by the industry standard, a NIN is meant to register 10 cards across all networks, but Bbosa says at the time when the registration was first done, telecom companies had no capacity to tell how many cards had been registered on a NIN.

As such, UCC restricted each telecom company to 10 SimCards.

However, corporate bodies including companies, nongovernmental organisations and government MDAs can register any number of SimCards on submission of documents of incorporation and a written application by their accounting officer. 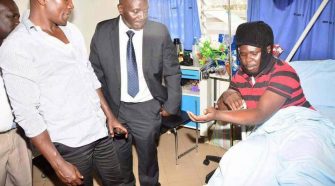