The Uganda Wildlife Education Centre (UWEC) zoo in Entebbe has been selected by the U.S State Department to host a hackathon aimed at creating tech-based solutions tailored to address wildlife trafficking.

This was revealed by James Musinguzi, the Executive Director of UWEC at a news conference in Kampala on Saturday.

The Zoo Hackathon 2019 will take place from November 15 to 19, 2019 is coordinated locally by the U.S embassy in Kampala.

A hackathon is a design sprint-like event in which computer programmers and others involved in software development collaborate intensively on software projects.

The goal of a hackathon is to create usable software or hardware with the goal of creating a functioning product by the end of the event.

Musinguzi said that for Uganda to host such an event is a privilege since it is the only country along with Egypt that was identified in Africa to host the hackathon.

“We are going to send out a call for proposals so that whoever is interested can come and use technology to develop solutions geared towards curbing wildlife trafficking”.

At the moment, Uganda largely relies on the deployment of armed rangers in the 10 national parks and other protected areas, so as to stop the poaching of wild animals. This is the primary intervention since all the animals smuggled out of the country are poached from the protected areas. Government has also banked on scanners at the airport and border points to detect any wildlife being smuggled out of the country.

According to Musinguzi, trade in wildlife contraband is not just a Ugandan issue but a global problem which also has aspects of terrorism. He said that syndicates of smugglers are increasingly trafficking live wild animals as well as their parts outside the country and within.

“It’s a big problem because it is a lucrative trade. And it is also related to terrorism. Money is generated through this wildlife trafficking to finance terror activities. So, the U.S government is concerned and it has put in efforts to see how we can develop solutions”.

“The event is also aimed at creating awareness. Many Ugandans don’t know about wildlife trafficking. Sometimes, they buy wildlife products without knowing the legislation against illegal trade in wildlife”

Trade in wildlife contraband has far reaching (negative) implications on Uganda, a country whose tourism is the highest foreign exchange earning sector, Musinguzi says. Last year, the country earned USD 1.5 bn from tourism. Majority of the tourists that visit Uganda for pleasure are attracted by the county’s diverse species of wildlife.

As such, Musinguzi who doubles as President of Zoos and Aquariums in Africa, says that killing these animals will inevitably result into a drop in tourists coming to Uganda.

“In Uganda, most of the tourism activity is nature-based, particularly wildlife. Therefore, if you continuously take out wildlife, you are reducing it as well as the attractiveness of the country for tourists,” he said.

“When these tourists are deciding on which destination to visit, they sit down and make a checklist. They are looking out for certain things. And one of those things is wildlife”.

As to why Uganda was picked to host the hackathon, the UWEC Executive Director attributed it to the strides that the country has made in wildlife conservation and management. He said Uganda has put in place all the relevant legislation, policy frameworks and has ratified international conventions in line with protecting wildlife.

UWEC is the coordinating zoo for all zoos and aquariums in East, West and Central Africa.

Possession and illegally trafficking wildlife products attracts a penalty of a Shs 1 million fine or a jail term of not more than 5 years or both.

In Uganda, elephants, pangolins and rhinoceroses are among the most poached animals given their parts (ivory and scales) which are highly valued on the black market. 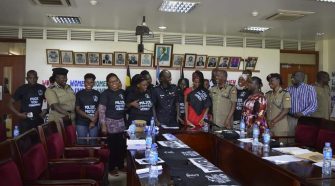