The Executive Director of UNAIDS, the UN agency for HIV/AIDS, Winnie Byanyima, has lauded Yoweri Museveni and the government of Uganda for the efforts in fighting HIV and Aids, but says leadership and funding is required to deal with new infections especially among young people.

Byanyima who assumed the leadership at UNAIDS last year was Monday speaking in Kampala at a meeting with the Minister of State for Presidency, Esther Mbayo and other stakeholders.

“I would like to thank the President for the fight against HIV even before he was President (during the bush war days), ” Byanyima said.

She called leaders at all levels to preach the gospel of prevention of HIV to the young people.

The former Head of Oxfam urged Uganda to support itself and not rely on external bodies for resources.

This, she said, can be done by cutting on the wastage of resources by government.

She cited previous cases where funds meant for fighting HIV and AIDS have been stolen.

“I see some efforts against corruption but more needs to be done. There is a lot of waste between 30 to 40% and this is because of selfishness among those who work within government. There is need to change our priorities,” she added.

“We need to understand that investments in human beings are as important as infrastructure. As we are growing, prioritisation (investment) should be put to the people”.

She also spoke about the need for equality that is inclusive of young women and girls are the most vulnerable to HIV infections.

“This is because women and girls are discriminated against by cultural traditions…. and this is where the struggle is strongest at now”.

In her remarks, Minister Mbayo who spoke on behalf of the government, said, there have been increased resources made available for the fight against HIV, but admitted they remain small.

She said most of the said resources are externally provided.

She said the Uganda AIDS Commission would appreciate technical assistance from UNAIDS towards social contracting mechanism.

The HIV burden in Uganda is still high, with 35,000 new infections annually, according t to Mbayo.

“If we address prevention probably we shall get there. Massive awareness campaigns have amassed positive results. We have seen more men going for HIV checkups”.

The Presidential Initiative on HIV, she said, “is a battle that is going to be won, not by a single institution, but by all of us working together”, including cultural and religious leaders, NGOs and government. 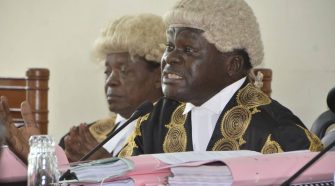 Hearing of Constitutional Amendment Petition Kicks Off in Mbale