Wednesday next week will see millions of the people in Burundi participate in the country’s historic general election seeking to choose a new president and representatives in parliament.

Some of the candidates in the presidential race include the ruling party’s Secretary General, Evariste Ndayishimiye, Agathon Rwasa of the National Congress for Liberty, Civil society leader, Dieudonné Nahimana (Independent) and Gaston Sindimwo.

The country has been marred by political violence since its last election in 2015 which saw President Pierre Nkurunziza run for a disputed third term in office. Crackdowns on opponents following protests and a failed coup left more than 1,000 people dead and sent hundreds of thousands fleeing to neighbouring countries, where most remain.

Next week’s election is defined by two outstanding factors – the coronavirus pandemic question and the fact that incumbent President, Pierre Nkurunziza is not contesting after promising in 2018 that he will step aside after 15 years in office.

Since its outbreak in December last year in Wuhan China, COVID-19, a disease caused by coronavirus since infected nearly 5,000,000 people and claimed more than 300,000 lives globally. While much of the rest of the world has limited social gatherings to less than 10 people, mass rallies across Burundi have attracted tens of thousands of people of different political stripes in recent weeks.

The government has encouraged people to continue as normal, assuring citizens that the virus would not affect the country like others because it “has put God first”. In March, Belgian and French-run schools were criticised for closing their doors, and residents were warned not to take preventative measures ahead of the authorities.

Burundi currently has a total 15 confirmed cases out which one died, 7 recovered and 7 active cases. The numbers are however disputed by many critics who challenge government’s response to the coronavirus pandemic as mass rallies draw thousands into jam-packed public spaces across the country.

They attribute their claims to how government downplayed various humanitarian problems in the past including the malaria epidemic, food shortages and rising political violence in the countryside.

Like earlier stated, President Pierre Nkurunziza is not vying for a fourth and already announced that he will step down for the new president after serving as the country’s leader for 15 years.

The ruling party, CNDD-FDD is fronting an army general, Evariste Ndayishimiye, as its candidate.

Nkurunziza’s election in 2015 was controversial. It triggered a failed military coup d’etat and a crackdown on opposition. Many journalists and human rights defenders went into exile.

Three years later in 2018 he announced that he would not stand for re-election.

It’s 15 years since Burundi emerged from a 12-year civil war between Hutu and Tutsi ethnic groups. Initially the peace agreement reached between the two groups was hailed as a success. But in the intervening years the country has experienced deterioration in both human rights and economic conditions.

Most observers expect Nkurunziza to respect his word and peacefully relinquish office after Wednesday poll. But it is unlikely to spell the end of social, political, and economic instability.

While the ruling party remains in power, the expectation is that there will be a further tightening of authoritarian rule and declining living conditions. The ruling party seems to be determined to safeguard its hold on power, even at the cost of a collapsing social order.

Having ruled Burundi with an iron fist for 15 years, many observers say Nkurunziza’s influence will still linger for a while after the May 20 election.

Meanwhile, if no presidential candidate receives a majority of the vote, a second round will be held on 19 June. 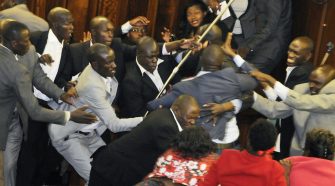