As Uganda commemorates the World Tourism Day later this month, focus will be placed on the potential that lies in the tourism sector for creation of employment for Ugandans, Tourism Minister Prof Ephraim Kamuntu has said.

The World Tourism Day is set to be marked internationally on September 27, and in Uganda, the commemorative activities will be held at Pece stadium in the northern district of Gulu.

Minister Kamuntu told reporters in Kampala on Saturday that tourism continues to shape the future of countries and that the impact of the sector in Uganda has been phenomenon.

In elaborating the magnitude of youth unemployment in Uganda, Prof Kamuntu cited the rate of graduates (40,000) who complete their studies annually from public universities with only 32 percent of them getting jobs in their first year upon graduation.

As a result, he said, young people are increasingly becoming desperate to leave the country in quest for employment opportunities abroad – especially the Arab countries – which come with many risks.

Beyond employment, the economic activities in the tourism industry bear a multiplier effect across the value chain, Kamuntu said.

“Every single job in tourism creates 5 more jobs. And statistics from the Ministry of Finance indicate that for every 100,000 additional tourist arrivals, Uganda increases its GDP by 1.6 percent. Note that Uganda’s average growth is 6.5 percent”.

“For Uganda to achieve its middle income status targets, we need double digit growth. And to achieve that, we will need to tap into tourism,” Minister Kamuntu said.

Tourism earns Uganda USD 1.5bn annually with about 1.45 million tourists visiting the country each year. However, government is working to increase the volume of arrivals to 4 million and revenue to USD 2.7m by 2020.

The sector, which is the country’s biggest foreign revenue earner, is largely driven by the private sector. This implies that in order for it to employ more people, government must ensure the conditions for doing business are favorable for the private tour operators.

For many years, private players in tourism have raised concerns relating to over taxation which they say frustrates business. Commenting on the issue, Prof Kamuntu acknowledged the concern and said it is being discussed at the level of the Presidential Investors Roundtable.

This date was chosen as on that day in 1970, the Statutes of the UNWTO were adopted. The adoption of these Statutes is considered a milestone in global tourism.

The purpose of this day is to raise awareness on the role of tourism within the international community and to demonstrate how it affects social, cultural, political and economic values worldwide.

This year’s celebrations in Gulu will be preceded by a series of activities including a tourism games event on September 15 at Kyadondo Rugby Grounds in Kampala.

This will be followed by a thematic conference on tourism to be held at Hotel Africana on September 17 and the Tourism Sector Review the following day.

Minister Kamuntu says the celebrations will be followed by a drive to explore the numerous tour attractions in Northern Uganda as part of the Tulambule campaign. 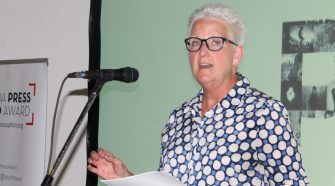 “Press Freedom is Under Assault” – U.S Ambassador Calls Out Govt