According to Sarah Eperu who was addressing journalists at the party headquarters on Monday, MP Odonga Otto is not objective in his attacks against former party president, Dr Kizza Besigye and the party leadership.

“He talks any howly. At one time, he is supporting you, the next day he is against you. He has been attacking Kizza Besigye,” Eperu said.

*Otto says different things everyday. How many times can you subject such a man to the disciplinary committee?”, asked Eperu.

“He (Otto) forgets that it was through campaigns like ‘Walk to Work’ that fuel prices reduced. We are committed to capturing state power through bloodless means,” she added.

Recently, controversial Otto, alongside MP Joseph Ssewungu of Kalungu West and Simon Oyet of Nwoya County vowed to shun ‘Tubalemese’ calling upon the youths to ignore Kizza Besigye’s campaign stating that he is bent and serving selfish interests.

Their remarks did not go well with the four time Presidential candidate who in response questioned their authority to downplay the campaign.

“What they (Otto, Ssewungu and Oyet) were doing was itself a contradiction. Whom did they consult to hold that press conference? On whose behalf were they responding?”, Besigye said.

“This country has two problems, a hostage country and the predatory elite. The elite class is part and parcel of the problem in this country,” Besigye said, adding that “there is a problem with individuals who you can’t tell where their face is – i think there are many Odonga Otto’s in this country”.

Besigye and FDC have on several occasions been attacked by a section of people over campaigns they say bear no results. 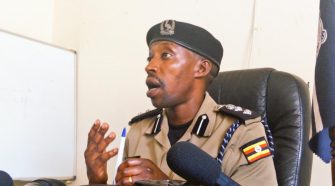