The President was reacting to a recent incident during which Private Niwanyine Alex, an officer of the UPDF was attacked with an iron bar in Amuru district as he enforced the Presidential directives on curfew. Niwanyine was asking shop-keepers to close and abide by curfew hours when he was hit. As a result Niwanyine who is attached to the 71st batallion lost his right eye and is currently admitted at Bombo general military hospital.

In a separate incident, a new Command Vehicle for 35 Battalion Commanding Officer in Kisoro district was hit with stones and the wind screen partially shattered by elements disobeying curfew rules.

“The other day we punished security personnel that caned people or beat them in any other way. This was because they violated standing orders of policing. You only use violence in self-defence. Nobody has the right to assault a member of the security forces. If you do, a member of the security forces has a right to use reasonable force to subdue you and arrest you,” the President said on Tuesday.

He defended security personnel deployed in remote parts of the country where these personnel lack equipment to shield them from harmful objects like stones.

“Throwing stones at members of the security forces is very dangerous. Stones thrown at the rural based security personnel without anti-riot equipment such as shields and helmets can result in death as happened to ASP David Ariong in Kampala”.

Museveni said that in self defense, these officers will use live fire to disable the stone throwers.

“In the rural areas, please be careful. It’s not like in Kampala here where the Police is well equipped with shields, helmets, to block the stones. You are not going to throw stones at them, injure them and they let you go. Do you expect them to run away? They are doing their work”.

Col Mbusi of 4 Div Gulu has visited Pte Niwanyine Alex in Gulu Hospital. He lost his eye when violently attacked in Bibia as he enforced directives to prevent COVID 19.Such incidents emerging including pelting stones at security forces must stop. pic.twitter.com/cBuCPNGjcL

“They don’t have rubber  bullets. They can shoot in the air, but if you don’t stop, they can shoot you. They can aim at the legs and you sit down. I would advise those throwing stones not to do it at all,” Museveni said.

The President cautioned the public against endangering the lives of security forces who are carrying out lawful orders, describing such hostility as foolishness.

He lauded the injured soldier acting with discipline and not killing the person who assaulted him.

In an earlier address to the country, the President advised security personnel to deal with issues related to enforcement of anti-Covid19 measures, firmly but legally.

UPDF, reacting to the incident in which Private Niwanyine lost his eye, warned of dire consequences to whoever will be caught in the act of violence as security forces enforce compliance with the guidelines against Covid-19.

“The security forces will continue to operate firmly and legally. Our unmatched high level of discipline should however not be overstretched and taken for granted. We need total cooperation of the public in order to save our people and country from extinction at the hands of COVID19,” Defence Spokesperson Brig Richard Karemire told this news website. 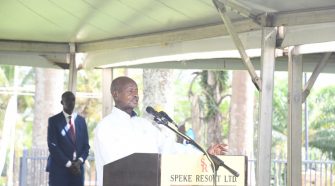