Two days since she survived the tragic boat accident on Lake Victoria which claimed over 30 people, singer Iryn Namubiru has again met the person who saved her life.

The man, Masole Brian, a student at Kampala International University along with his peers had hired a boat on the fateful night. The group had been on a fun excursion on an island close to where the boat carrying Iryn capsized.

When they became aware of the accident, Masole and friends rushed to the scene.

“He saved my life and many other people, he went back to the lake 3 times until there were no other people alive,” the singer wrote on her social media page on Tuessay, moments after her second encounter with Masole whom she called her hero.

Iryn revealed that, Brian quickly took his friends onto the shore of the lake and embarked on a rescue mission which saved among others herself.

The celebrated singer had been wailing for help when Brian incidentally heard her. She waved a light which attracted Brian’s attention.

“He asked me for the phone, bag and then pulled me in. Then he tried to pull the lady who came grabbing on my hand and life jacket almost drowning me,” she wrote.

“I managed to bring her up to the boat but she died right there as part of her life jacket got stuck under the boat and she was to heavy,” Namubiru recounted.

The said theblady was a wife to Bisase alias Templar, the owner of the boat.

Iryn says she left her phone with Brian which he used to save others. In moments that followed, Brian attempted to resuscitate a lady whom she suspects must have died.

The singer could not hold her gratitude towards the student, the fishermen, locals in the area and everyone else that was involved in the rescue effort.

“It’s unfortunate that One fisherman died so others could live”.

She says that Brian called Iryn’s friends and assured them she was safe. Later in the night, at around 3:30pm, he visited Iryn together with her manager just to make sure she was okay.

“Yesterday Monday 26th 2018, Brian came home, brought back my shoes and phone. We took this photo. You are my hero. 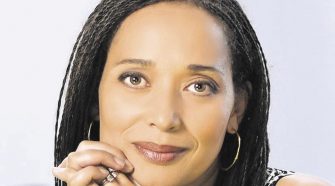 OPINION: A Diverse and Culturally Rich African Continent is a Bedrock for Storytelling