The Ministry of Internal Affairs has revealed that Mityana Municipality Member of Parliament (MP), Francis Zaake inflicted the injuries on himself refuting allegations that security organs tortured him.

This was in a report to Parliament by the Minister of State for Internal Affairs, Obiga Kania on preliminary investigations into the allegations of assault against Hon. Zaake Francis Butebi by some security officers.

Zaake was arrested on Sunday April, 19th from his home in Mityana on allegations that he had distributed food to his constituents contrary to the guidelines that have since been issued by President Museveni in the fight against COVID-19.

The Minister said that after being arrested, Zaake was transported to the Police Cells in Mityana in the RPC’s vehicle UP 4799 seated in the middle of RPC and the Deputy CID Mityana D/IP Wabwire while the DPC was seated in co-drivers seat.

Obiga said that on claims that Zaake had been beaten by the RPC, DPC and other police officers on the way to the station, and in the office of the DPC before his detention, this was never found out by the investigators.

“According to Ssemujju Augustine, Kiiza Mustapher and Wamala Sperito, suspects who were with Hon Zaake in the cells, Hon Zaake, was in a jovial mood and did not have any signs of injuries nor did he tell them that he had been tortured by the police. He only asked their problems and after narrations, he promised to solve their problems since he was now in cells with them. They began to sing People Power songs,” Obiga said.

The Minister said that on learning that Zaake’s supporters were planning to attack the police, a decision was taken to have him transferred to Kampala but Zaake together with the suspects protested and Zaake refused to move out which prompted AIP Masaba to call in some of his personnel to help him remove Zaake forcefully from the cells.

“According to the suspects who were in cells, Hon. Zaake held metallic door of the cells and also placed his leg one side in between the metal bars so that it is difficult for the police to pull him out. The FFU personnel pulled out Hon Zaake by force from the metallic bars that he had held onto for support. He was taken to the counter and handcuffed but while resisting Hon Zaake alleges that at the time of his removal from cells, the officers sprayed his eyes with pepper spray affecting eye sight, and another tear gas was thrown to the inmates. This was never confirmed by the other suspects in cells,” Obiga said.

Obiga noted that according to SP Mwine, Hon Zaake resisted being handcuffed and reasonable force was used to handcuff him and in the process his t-shirt got torn. After the police succeeded in putting on handcuff on one hand, he overpowered them leaving the handcuff dangling in one hand. This prompted them to grab the second hand and fixed a handcuff Hon Zaake was therefore handcuff with two handcuffs but one was only on one hand leaving the other part dangling.

“According to CPL Lomokol Hon Zaake was transported in the 999 vehicle number 23 which he commanded, it was driven by SPC Kafeero and the crew members were Okolis John, Okiror Julius, Ongewun Michael and PC Omagol Nelson. He further stated that Hon, Zaake was shouting and hitting the metallic seats of the 999 using his arms and legs. According to the DPC, Hon Zaake could not be transported in the RPC’s double cabin because of the violent behavior he had exhibited during boarding him to the vehicle,” Obiga added.

The Minister continued to state that according to the PF 24 examination that was conducted by Dr. Nuwamanya, at Iran Uganda Hospital, it was established that Hon Zaake had blunt injuries. They were on the forehead, earlobes, right and left of the chest, right side flank, right upper arm, right wrist, lower lip, left leg and left leg shin.

It was also established from Hon Zaake that the examination was conducted by three doctors, Dr. Kato of Iran hospital, Dr. Ssekitoleko personal doctor to Hon Zaake and Dr. Nuwamanya a Police surgeon, in the presence of Hon. Zaake personal lawyer, Hon. Ssegona.

Obiga narrated that on the 27th April2020 the charges under the Mityana CRB 26812020 had been sanctioned. The Police officers who included D/ACP Oketcho Isaac, DllP Tweisgye Hamdan went to Iran Uganda Hospital to take Hon. Zaake to court in Mityana.

“At the time Hon Zaake was putting on a vest and boxer. According to Zaake, he was dressed like that because he was feeling hot. When Hon Zaake Iearnt that he was being taken to court, he refused to dress decently and yet his wife had carried descent clothes to vehicle. At the same time according to Dr. Kato Edward the hospital had also discharged Hon Zaake to see an Ophthalmologist.”

The Minister added that Zaake was led to a double cabin pick-up which he rejected. A Police Ambulance was brought he also rejected it until he was forced to sit in it.

“According to the nurse Ndagire Tatura, Zaake used the metallic hook in the ambulance to injure himself. Hon. Zaake was transported in the company of his wife and nurse and D/IP Twesigye while he was violent and he kept hitting himself on the metals in the ambulance hence injuring himself on the arms and he requested for painkillers and he was put on painkillers through the drip,” Obiga explained.

The Minister however noted that there is need to have Hon Zaake subjected to an independent medical examination to determine his health status. 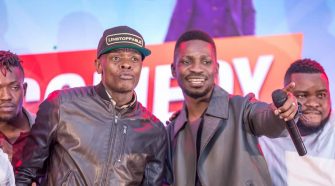