Mnangagwa won his closest contender, Mr Nelson Chamisa of the opposition MDC-Alliance and other twenty one (21) candidates.

The more than 50% attained by Mnangagwa shields him from a runoff election with Chamisa and will serve a 5-year term as President of the Southern Africa nation.

Zimbabweans went to the historic poll on July 30 for the first in 37 years without former President, Robert Mugabe’s name appearing on the ballot, following his ousting by the military in November last year.

Out of the 16 million people in the country, 5.6 million are registered voters most of whom are below 40 years. A voter turnout of 70% was registered.

No serious cases of violence were reported on voting day and as a result, regional election observers described the polls as having been generally peaceful.

On Tuesday August 1, MDC Alliance candidate Mr Chamisa and top party official, Mr Tendai Biti claimed they had won the popular vote and were waiting for the electoral body to declare them victors.

A day later, ZEC continued announcing parliamentary results amid calls by the Commonwealth and European Union (EU) election observers and the MDC-Alliance officials to release the Presidential results. ZEC had up to tomorrow Saturday August 4 to announce the final results.

By end of Wednesday, ZEC had released Parliamentary results from all the 210 constituencies with the ruling ZANU-PF winning the 2/3 majority. ZANU-PF won 144 seats, MDC Alliance got 64 seats, another party NPF won 1 and the remaining seat was taken by an independent candidate.

But Mr Chamisa in another press briefing insisted that he would not accept any results which were not in his favour. He said the delay to release Presidential results was a ploy to deny him victory.

The pronouncement of Parliamentary results sparked off deadly protests in the city Harare with stone throwing MDC-Alliance supporters demanding the release of presidential results and that their candidate Mr Chamisa be declared winner. Several cars were burnt and property destroyed.

It took the intervention of the military and riot Police to restore calm. Three people were confirmed dead and several others injured. The incumbent Mr Mnangagwa said MDC-Alliance officials were behind the protests and were to be held responsible.

Towards midnight on Thursday, ZEC started announcing presidential results but the MDC-Alliance spokesperson stormed the ZEC command centre just after the electoral body officials had announced results from 9 regions out of the total 10 and were in the break to finalise with results of the tenth region (Mashonaland West).

He addressed the media and claimed the results being read by the ZEC Chairperson, Ms Priscilla Chigumba, were “fake” since his party agents had not ascented to them. He would later be forced out by security before ZEC announced the final results.

Mnangagwa speaks out on his victory

The President-elect Emmerson Mnangagwa who had also been serving in the interim as Mugabe’s successor said his election had marked a “new beginning” for Zimbabwe.

“I am humbled to be elected President of the second Republic of Zimbabwe.
Though we may have been divided at the polls, we are united in our dreams,” he said in a tweet.

“This is a new beginning. Let us join hands, in peace, unity and love, and together build a new Zimbabwe for all,” Mr Mnangagwa added.

Mr Mnangagwa’s win is a big blow to former President Robert Mugabe, who in a press briefing on Sunday July 29 endorsed Mr Chamisa saying leadership of his own party ZANU-PF was “tormenting” him thus not worthy his support.

Zimbabwe’s new leadership is now tasked with fostering unity among the widely divided population in its quest to solve the roaming economic problems the country is facing. 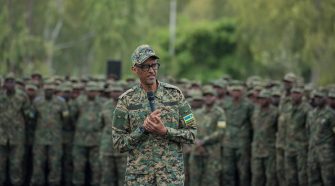