Police have Monday announced that they obtained a CCTV footage from Mulago National Referral Hospital showing what transpired on the day late Ziggy Wine, a member of Bobi Wine’s Fire Base crew, was received there.

The late musician went missing on July 21 prompting his immediate neighbour, Mugarura Patrick, to report a complaint of his disappearance at Ganda Police Post on July 27.

He would later be found by his family members at Mulago hospital with serious body injuries before his death on August 4. Police investigations attributed his death to injuries sustained after a motorcycle accident he encountered on July 21.

Police said after the accident, he was rushed to Hope Clinic in Kyebando for first aid from where he was transferred on a boda boda, by Turyamureba Amos (the rider) and Kimbowa David, a staff at Hope Clinic, at around 8pm.

Kimbowa David, handed over the victim, at the Casualty Ward in Mulago, where he was admitted that very evening, Police said, before assuring the public that they were working with the management of the National Referral Hospital, and reviewing the CCTV footage.

But since then, Police had not given an explanation in reference to the hospital’s footage yet the unsuspecting public has continuously been demanding for it.

“We have two cameras that captured that movement around 8pm, one of the cameras is that one at Church Road (Kukisaawe) showing that they came from down, negotiated that corner to the causality wing and the second camera at the causality ward for the Police captured three people on the motorcycle, the rider, victim and the helper,” Enanga said.

“At the causality ward, you will notice that the victim appeared weak, he was supported by the helper who led him in the direction of the ward,” he added.

He however says the cameras at Mulago hospital “because of the ongoing renovation, they can not provide additional footage” to show what transpired inside the ward.

The Police spokesperson further expressed pleasure with Turyamureba Amos (the rider) and Kimbowa David, a staff at Hope Clinic for helping in saving the life of the deceased. 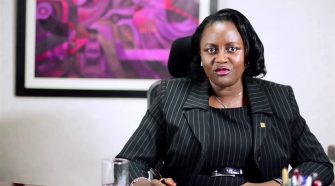