“Whereas Cabinet has issued a statement on this particular debate, we would like to guide our party members that the debate on the alleged proposal to amend article 102 (b) of the Constitution is misguided; irresponsible, redundant and at best diversionary,” Simon Peter Aleper, the NRM vice chairperson for Karamoja region, who leads the faction told press on Monday at NRM headquarters in Kyadondo.

Aleper who was flanked by Gabriel Kato and national vice chairman for central region Godfrey Nyakana, said they followed the intense debate surrounding the alleged proposal to amend article 102 (b) of the 1995 Constitution for quite some time.

According to Aleper, the NRM party has embarked on implementing its Manifesto which focuses on lifting the lives of Ugandan citizens to a middle income status by 2020.

“This Mandate is still fresh and requires a lot of commitment, responsibility and leadership. Unfortunately, this debate threatens to divert our attention from fulfilling our Contract with Ugandan Citizens.”

He further explained that the NRM party has well established organs and procedures of discussing such matters that have very profound implications on the future unity and stability of the country.

“Whereas we respect the opinion of individuals on this matter, we would like to guide our party members to channel their views through established Organs of the party for consideration,” Aleper added.

The 4-man faction of the Central Executive Committee which is chaired by the party Chairman and President, Yoweri Museveni, said this particular alleged proposal has not been discussed or even considered for discussion.

“We would like to guide that our members of NRM are encouraged to begin thinking broadly and deeply in how to transition from President Museveni,” Aleper explained.

As a revolutionary party, the faction said, NRM members should not fear to discuss the challenges of the future with or without President Museveni and how to confront those challenges.

“We are a tested political organisation capable of surmounting any challenge. So as a party we must open up the debate on transition.”

Aleper said they plan to formally table their position of transition so as to kick start a debate of succession through the National Executive Council (NEC), District Conferences and Consensus at Delegates Conference. 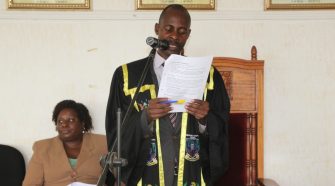