Wife to detained musician, also Member of Parliament for Kyadondo east, Robert Kyagulanyi alias Bobi Wine has questioned why her husband is being detained in a military facility yet he is a civilian.

Barbie Itungo Kyagulanyi, the wife to Bobi Wine together with other family members are demanding for the release of the legislator who Police confirmed was arrested on Tuesday.

He along with Kassiano Wadri, a candidate in the ongoing Arua municipality election and some other four MPs were arrested for their alleged involvement in Monday’s attack on the convoy of President Museveni in Arua.

Police said that Kassiano Wadri’s supporters including Bobi Wine were responsible for hurling stones at the motorcade of the President.

On Wednesday, the New Vision newspaper reported that Bobi Wine is being held in a military barracks. But his family says this goes against Bobi Wine’s rights since he is not part of the military.

“A Member of Parliament for Kyadondo East is missing. The latest we have is Bobi Wine is held in military barracks,” Barbie Kyagulanyi told reporters in Kampala on Wednesday.

“My husband has never been in the military. He has no military experience and has never held a gun. I wonder why is he held there. What has he done to deserve this?” she said.

“Government should not be segregative. Other people are doing the things he is doing. We don’t know why they now get to pick up Bobi and a few others,” he said.

Similarly, singer Eddie Yawe who is also a brother to Bobi Wine demanded that the MP be produced within 24 hours.

Lawyer Andrew Karamagi who will be representing the family in court said that they intend to file a suit challenging the unlawful detention of the singer and the colleagues he is detained with.

Meanwhile, Mayors of Nakawa and Kawempe Divisions in Kampala have also come out to condemn the arrest of Bobi Wine, Kassiano Wadri and the others.

“We condemn manner of their arrest and keeping them in safe houses. We are giving government an ultimatum of 48 hours to produce them,” Emmanuel Sserunjogi the Mayor of Kawempe Division said.

Failure to have the legislators released, Sserunjogi said that they will have no choice but “mobilize our people and those who believe in people power, to go to the IGP and ask for the whereabouts of our people”.

On his part, Ronald Balimwezo, the Mayor for Nakawa said it is unconstitutional to hold civilians in military barracks. 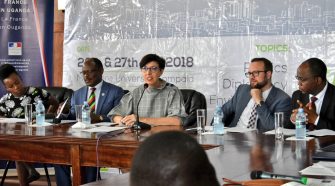