The opposition Democratic Party (DP) has vowed to contest before High Court in Mbale, the decision by the Electoral Commission (EC) to disqualify the DP candidate, Deogratius Hasubi Njoki from running in the Busia LC 5 by-election.

Njoki was on Friday evening disqualified from the race along wkth the NRM candidate, Boniface Paul Oguttu.

The candidature of Hasubi Deogratius Njoki (DP) was cancelled because the names under which he was nominated do not match with those in the National Voters Register.

On his part, Oguttu was disqualified on grounds that the names in the nomination papers he presented during nominations are different from those on the requisite academic documents accompanying his nomination papers.

Commenting on the decision by EC, the DP President took to Twitter to protest the decision by the Electoral Commission to nullify the nomination of Njoki. He said the party is heading to the High Court in Mbale on Monday to challenge EC’s decision.

“This is gross! The Busia NRM LCV candidate is down and out and has no return ticket. His academic papers are fake. Ours is out due to malice and desire by EC to appease NRM. Deo is a registered voter. Period. The arena now changes to Mbale High Court. Monday. 9am,” Mao tweeted.

The Party Secretary General, Gerald Siranda told SoftpSoft News on Saturday that the party has now assembled a team of lawyers who will file a case before court.

“We can’t allow to suffer at the mistake made by NIRA, which they acknowledged. This decision made by EC clearly shows that Njoki was as well irregularly nominated in the general elections which was never the case,” Siranda added.

Siranda said that the party will be seeking a court injunction against the elections scheduled to take place on Wednesday November 28 as well as seeking the reinstatement of the DP candidate. 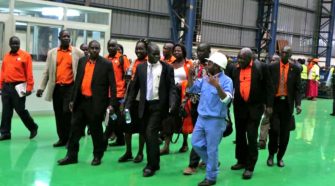