Dr Jotham Musinguzi, the Director General of National Population Council (NPC) has been approved by Cabinet to head the Board at National Medical Stores.

Musinguzi, a public health physician who was previously the Regional Director of the Partners in Population and Development (PPD) was approved to head a Board of 15 other members at NMS.

This was during a Cabinet sitting at State House Entebbe on Monday.

Cabinet also vetted and approved Medard Bitekyerezo, the Chairman of the National Drug Authority (NDA) on the same Board.

At least 10 members who have previously been on the NMS Board of Directors were dropped including Moses Kamabare. Dr Musinguzi has been replaced by Dr Phillip B. Byarugaba who has been the Board Chairman.

Dr Jotham Musinguzi has been at the helm of the Population Secretariat since 2007. He has also served as a Trustee of both the Population Council of New York and the Commonwealth Medical Association Trust.

Dr Elly Karuhanga Takes Over Chair as PSFU Gets New Board 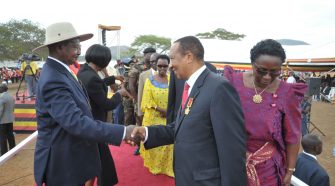