Government is set to relocate a total of 6,300 people from Bududa district to Bulambuli district after Cabinet directed the Ministry of Finance to avail Shs 32.75 billion.

This comes days after landslides hit the sub-county of Bukalasi in Bududa district on the slopes of Mt Elgon leaving a trail of destruction. The disaster has so far claimed 43 people, left 21 injured and 144 homes were washed away.

At least 800 people in 13 villages have been left homeless.

State Minister for Disaster Preparedness, Musa Ecweru told the press on Tuesday that Cabinet on Monday passed a resolution to have 900 households who are in diasater prone areas of Bududa to be relocated to Bulambuli immediately.

In Bulambuli, each of these households will be allocated land measuring 2 and a half acres to settle. The Minister said that the new settlers will be obliged to then surrender the land they previously owned in Bududa to government which will be used by National Environmental Management Authority (NEMA) to plant a forest.

“Resettlement is now possible because there is consensus. The politicians are also accepting relocation of people particularly those at high risks,” Minister Ecweru told reporters at the Uganda Media Centre.

He admitted that there has been long delays in resettling persons at risk of landslides but this was partly due to the fact that people were unwilling to be relocated. He also blamed it on some politicians in the Bugisu subregion that mobilized people not to accept relocation.

Each of the households to be resettled in Bulambuli will be given 30 iron sheets, 50 bags of cement, 20,000 burnt bricks, 10 tonnes of sand, roofing timber, nails, two doors and four windows.

In addition, government will support them in bush clearing, tilling their land using tractors and provide materials for planting. Relief food will also be provided until they make their first harvest, Ecwaru reveled.

In the 2019/20 financial year, government will resettle some more 10,000 people at risk of landslides to safer locations.

According to Minister Ecweru, there are up to 100,000 people who need resettlement in the Bamasaba region.

He said that nothing is going to stop government’s efforts to resettle these people this time round.

He refuted the narrative in the media that the people who were previously relocated settled in the wetland. Ecweru clarified that the entire lowland that surrounds the Mountain sits in the path way of the waters that flow from Mt Elgon.

“If you go to Sironko, parts of Butaleja, Bulambuli, they all sit on the path of the torrential waters from Elgon. But there is an effort to rechannel the water and manage it better. It is a fertile place and it is a lot safer than staying in a landslide prone area”.

No selling of land

In it’s sitting on Monday, Cabinet also resolved to place a caveat on the land allocated to the settlers in Bulambuli in order to check ‘land sharks’ who buy off the land cheaply and force more people into displacement.

“We have not given these people land titles because land sharks are on standby to go and buy them off because that place is fertile,” Ecweru said.

“Cabinet has taken a position that when you are given 2 and a half acres, we shall put a caveat of 25 years. You will not sell that land until 25 years”.

He said that there has been a consistent pattern in previous resettlement efforts where rich people rush to acquire interests of the poor people.

“We have learnt our lesson. We shall settle you but we shall not let you sell that land,” he said. 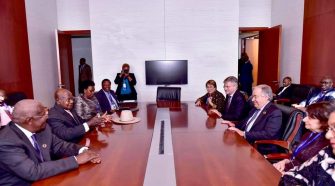