Bagyenda was appearing before the Parliament committee on Commissions, Statutory Authorities and State Enterprises (COSASE) responding to allegations that through her aides; Juliet Adikolet and Dan Turyahabwe, she sneaked out confidential bank documents.

The committee began by reviewing the footage by CCTV cameras showing how Bagyenda, her aides and visitors accessed the bank without following proper security procedures.

Opio told committee members that according to the security manual of the bank, all staff including Bagyenda must go through security checks while entering or leaving the bank. He said Bagyenda was never subjected to these checks on some days in the month of February, 2018.

It was noted on the video footage that Bagyenda used Adikolet to carry bags out of the bank without passing through the security check points.

The committe heard from Opio that on Sunday February 4, 2018, Bagyenda as well facilitated her visitors identified as Masaba of MMAKS advocates as well as the Managing Director, Bank of Baroda, Ashurin Kumal who never went through security checks.

Opio said that according to the manual, if one must let in visitors, she/he must seek clearance from the Director Security which Bagyenda never did.

Asked why she never sought for any clearance from the security director, Bagyenda responded that she was never aware of any provision that required her to seek clearance before letting in her visitors.

Her response left legislators wondering how a senior staffer of the bank who had served for over 35 years was never aware of such a serious security requirement.

Bagyenda indeed admitted that the visitors viewed on the CCTV footage were her visitors and on official duty.

Asked why she sneaked out her personal documents and property out of the bank without allowing to be checked, Bagyenda insisted that she didn’t know why her bags were never checked by the security officers who were on duty. She added that she was in her office and couldn’t know what happened out and why.

The committee asked Security Director to explain whether Bagyenda used her powers to stop security officers checking her aides while letting out her bags.

Opio noted that there was intimidation against the security officers who were on duty given the security detail she had around her that evening adding however that investigations are still on-going to determine if there was any connivance.

Opio further revealed that the original footage captured more revealing details which could not be availed to the committee. He said that what was presented in today’s proceedings was an edited version.

The legislators then ordered the Security Director to avail the original footage saying there is no purpose to continue interrogating witnesses based on edited footage.

“We should be fair, we can’t continue with the matter yet we subjected the witness to edited footage. May you forward the original footage unedited,” Abdu Katuntu ruled. 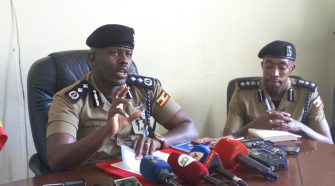 Police Steps up Scrutiny on Public Places, Security Guards Ahead of Christmas