Police has re-arrested Charles Lambert, who is said to be the Director of Development Channel, a ponzi scheme that has been operating in Uganda, for failure to settle debts amounting to over Shs 200 million.

Lambert, 44, a British Nigerian was arrested Tuesday and detained at Jinja Police station over allegations that he has been conning millions of cash from unsuspecting clients.

This is the second time Lambert is being arrested in a period of four months. In August this year, Police arrested him for engaging in fraud and money laundering.

His arrest had followed complaints by disgruntled workers of various transport companies who had been planning to set ablaze one of the Development Channel premises. The aggrieved parties told Police at the time that Lambert owed them Shs 127 million.

Richard Kimuli Ssenoga, the head of transporters told Police that, Development Channel had since February 2018 hired a total of 63 PRADO SUVs to ferry various dignitaries around different parts of Uganda promising the owners daily income of Shs 150,000.

Following his initial arrest, Lambert paid a sum of Shs 17 million and committed to pay the remaining balance in a period of two months, which he failed to adhere to. The debt has since accumulated to Shs 213 million.

The creditors made several attempts to recover their money from him but to no avail which prompted Police to again arrest Lambert.

To their surprise, the creditors learnt that the Bukoto based Developmemt Channel offices had been closed down and all properties sold out. Sharon Nakkazi, 24, a marketeer told Police that she paid a sum of US$ 270 for a No Drop Out tablet in January 2018 and was promised a guaranteed monthly payment of US$ 100 for the rest of her life.

However, she says that for 10 months now, she hasn’t received the dividends promised to her on her account. This forced her to open a case (obtaining money by false pretence) against Lambert at the Police.

Over 200 complainants have so far reported to different Police stations in Kampala complaints against the ponzi scheme to which they say they lost monies.

Kampala Metropolitan Police Spokesperson, ASP Luke Owoyesigyire has warned the public to be cautious and not be duped by scamming companies. He said that such investment chain companies collapse whenever they run out of new recruits or when they fail to pay the promised benefits.

Development Channel has been running a scheme under the guise of a poverty alleviation company aimed at empowering Africans with a lifetime payment in a ruse designed to defraud victims located throughout Uganda. It has managed to reach out to its targets through placing advertorial posts on social media and infiltrating soft spots like churches, schools, hospitals, and non skilled job seekers promising them hefty pay.

An unsuspecting person is lured by the Development Channel marketeers into buying iPads known as ‘No Drop Out’ at a cost of US$ 278 (Shs 1.04 million) after which the buyer fills a form and gets a profit sharing certificate. 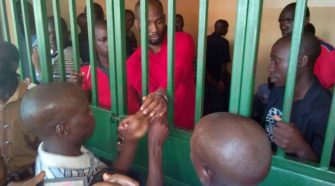