Opposition Democratic Party (DP) has called on Parliament to investigate the death threats targeting journalists which have been making rounds on social media in recent days.

The opposition party Publicity Secretary, Kenneth Paul Kakande made the call while addressing the media following a hit list of journalists that has been circulating on different social media platforms.

A total of 12 journalists reporting in greater Masaka from different media outlets were listed among the next target of assassins who are yet to be identified.

“We don’t know who the perpetrators are. Are they state agencies? Is it the Police which of recent has rotten? Are they security organisations who are uncomfortable with the exposure that the journalists are doing of the human rights abuses?” Kakande wondered.

“Who can threaten journalists except the one that is not comfortable with what they are exposing to the public and the world at large?” Kakande further questioned.

He said that the Constitution protects press freedoms, the liberty of a person, free communication and exchange of ideas.

The threats to journalists are a manifestation that the government has failed to protect individuals and journalists in particular, he added.

He cited government as being the first culprit in hammering journalists mercilessly and intentionally.

“It is known that it is a strategy of our Police to beat up journalists to threaten and instill fear in them not to exposse the excesses metted out by the Police and other security organs”.

“We condemn these acts and we call upon Parliament to investigate these matters and come out with a report and solutions,” Kakande said. 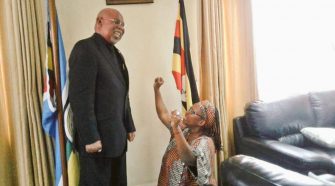